Binocular scale image showing the path of comet C/2013 A1 Siding Spring and Mars during October.  Click to embiggen and print. A printable black and white PDF chart of this image is here. The large circle is the field of view of 10x50 binoculars. The comet is far too dim for binoculars now, but the chart will help orienting yourself for the high resolution chart below.

Unless you have been living in a cave this past year you will know that in less than a week comet Siding Spring comes close to Mars.

The pair are at their closest on October 19, when at 18:51 UT they will be a mere 1' 51" apart (that's one arc minute 53 arc seconds, about the width of a human hair). Unfortunately, this will only effectively be seen from Africa. From the Australia the closest the pair get is a bit under 18' before the comet is too low in the sky for effective observation.

Simulated view in Celestia of Siding Spring passing Mars. Although the tail appears to pass between Mars and Phobos this is a rendering artifact. The comet is well beyond Demios (the dot near the centre).

Passing 138,800 Km from Mars, comet Siding Spring comfortably misses the red planet. For comparison. Mars's outermost Moon Demios circles the planet at around 20.000 km from Mars's surface (on the other had, the average Earth-Moon distance is 384,400 Km). 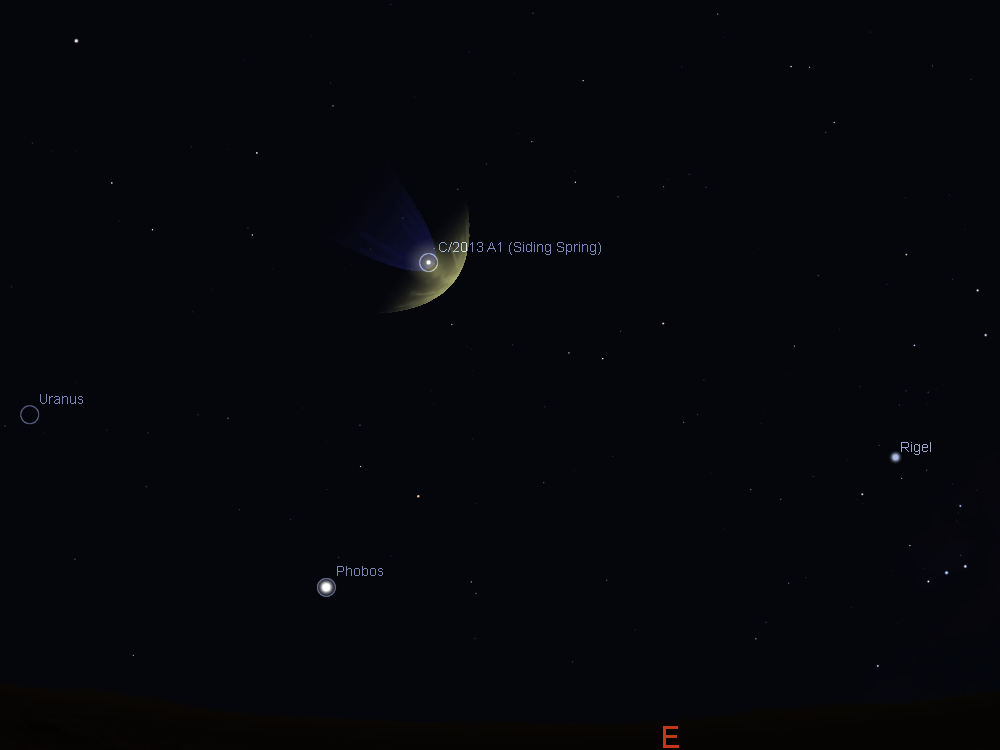 Simulation of comet C/2013 A1 Siding Spring as seen from Mars on the 19th, shortly before local sunrise. Simulation in Stellarium, which somewhat exaggerates the comets appearance (what the heck is with the bow shock thingy!).

A small flotilla of spacecraft are getting ready to either observe or avoid the comet (see this cute "I'll Save you Robots" graphic as well, and this graphic of the planned orbital observations) . While the comet itself will miss Mars, the planet may be enveloped in its coma, and there is the possibility that cometary dust and debris will damage the spacecraft. Nonetheless, we are preparing for a bonanza of space based observations.

Chart of the path of C/2013 A1 (Siding Spring) and Mars from 13 September to November, as seen from Australia at the end of Astronomical twilight. The large rectangle is 4 degrees by 2.5 degrees and the small  rectangle the approximate field of view of a Newtonian scope with a 10mm eyepiece. Click to embiggen and print.

The comet was relatively bright (around magnitude 9) and passed through some stunning astronomical territory. Now it is around magnitude 11 and still in interesting, if crowded, skies, but not as spectacular as before.

The rich stellar backgrounds make seeing the comets tail somewhat difficult against the crowded stars.As of writing only reflecting telescopes with an 8" mirror or better have been able to pick up the comet visually in eyepieces from 30 mm to around 10 mm. Imaging systems will have better luck picking the pair up, and some DSLR images have picked up the comet (very faintly, see also here - warning, big image). 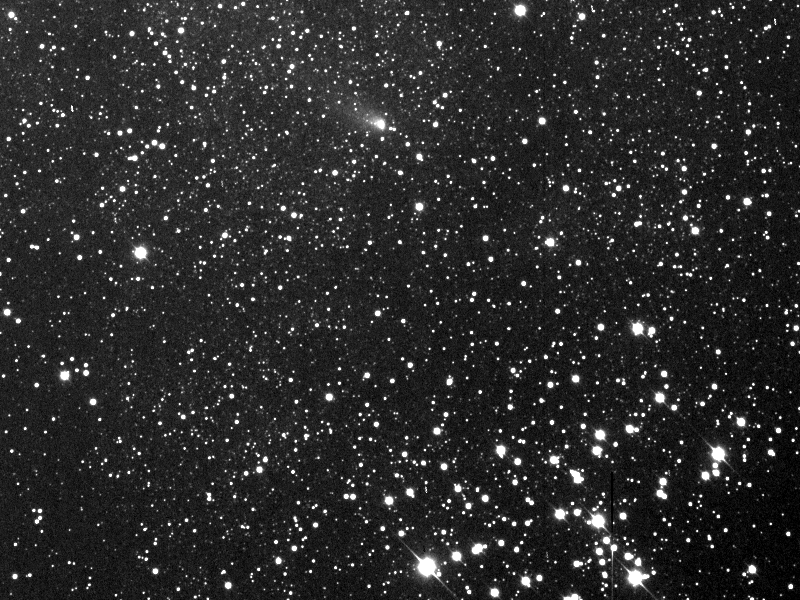 Whether using a DSLR camera with telephoto lens, or a CCD imaging system,

You may need to do a MEDIAN combine when stacking images to bring the tail out at its best (messes up the pretties but you can do a separate image emphasising the clusters and so on).

As well as the standard exposures, if you have R, B or V astronomical filters and can take some images with them that would help the science missions as well (allowing definition of dust to gas ratios etc).

The biggest challenge will be getting images of Mars and Siding spring in the same frame.
With the comet around magnitude 11, and Mars at magnitude 0.9 the difference in brightness is enormous.  You will have to take a series of  really short exposures to avoid over exposing Mars, and a series of longer images to bring out the comet (see below for more details).

Another problem is that for any eyepiece/CCD camera frame that gets both Mars and the comet in the  same frame  Mars will be tiny (at least from Australia, from South Africa, larger magnifications will allow both the comet and Mars in the same field).

Mars imaged for 1 second using the Ha filter on iTelescope T9. Kinda small and not much detail.

Obviously some practise will be required to get the exposure parameters right before the night of the actual encounter.

Now that the Moon has left the early evening sky, this is a good time to test your imaging out on the comet and Mars. Locating the comet may be a pain if you don't have an automated GOTO scope. On the 17th the comet is one degree from the 13th magnitude globular cluster Pal 6, which may make a nice test of your equipment.

Despite the difficulties, this will be an historic encounter, and well worth the effort if you have medium to high end astronomical gear.

If you are clouded out, there may be live coverage from iTelescope and the Virtual telescope (watch this space).