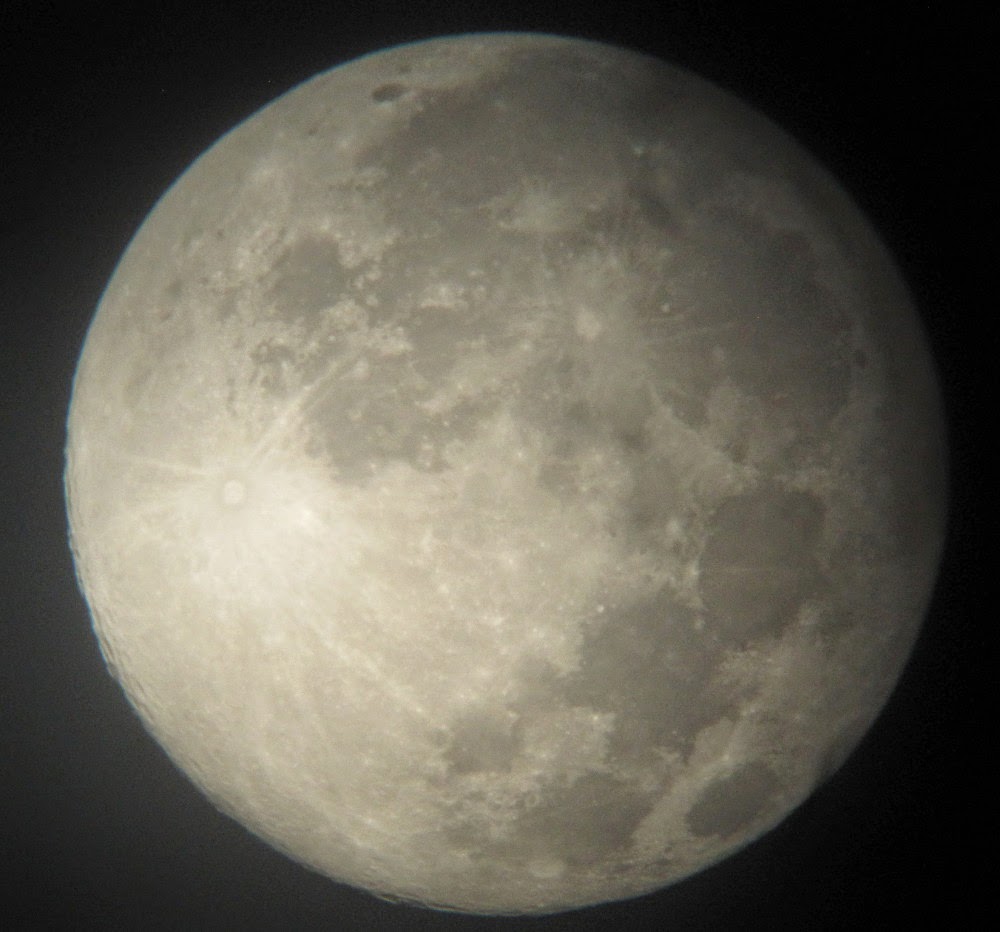 Friday the 13th Full Moon taken using my 4" Newtonian reflector and my Canon IXUS using a 25 mm eyepiece and infinity to infinity focusing.

Due to the congruence of the Full Moon and superstition around Friday the 13th, flights of fancy are abounding on the internet.

For one thing, this is NOT a supermoon (despite claims here). The Moon comes to perigee (closest approach to the Earth) two days after full this month, you need to wait until August 11 for an actual "Super Moon".

Well, wow, that's rare right! Well, it is true of any arbitrary day date combination. Another full Moon falls on Friday November 7 this year. Prior to that a Friday 7 full Moon occurred in 1996, and the next will not be until February 2031. But we put a lot of meaning on Friday the 13th, Friday the 7th not so much. So the apparent rarity of Friday the 13th Full Moon impresses us compared to other Friday dates (Friday the 13th First Quarter, Last Quarter of New Moons don't impress us so much either).

This is also the closest full Moon to the Solstice so the Moon is riding high in the Southern Skies, well worth going out and having a look.

Some other good links here, and here.

In Europe and America this full Moon is a "honey Moon", to the Algonquin Indians of North America it was a Strawberry Moon, but  I couldn't find any Australian Indigenous names for seasonal Moons.

For most Australian Aboriginal Groups the Moon was male, rather than female, for the local Karuna peoples of the Adelaide plains, the Moon was called Kakirra, for the Boorong peoples of north west Victoria the Moon, Mityan, represented the quoll or native cat. Quolls have full moon, half moon and crescent moon shapes on their coats.