Now that comet 2010 X1 Elenin is a handful of dust, the Doomsayers have had to find a new object to panic about. They have found it in the form of the asteroid 2005 YU55. This 400 meter chunk of rock is now the focus of their inchoate fears. It has eclipsed the previous doom asteroid, Apophis, which is of a similar size, for the moment, despite not being on the list of potentially hazardous asteroids.

As with Elenin, this panic is largely due to people not appreciating the scale of the solar system. In comparison to the distance between the Sun and Pluto, YU55's upcoming encounter with Earth is close. But the asteroid comes no closer than 85% of the distance between the Earth and the Moon (350,000 km). In contrast, Apophis will come within the orbits of geosynchronous satellites in 2029, (12,000 km, over 20 times closer) and will not hit us. Heck, earlier this year 2011 MN skimmed above the geosynchronous satellite zone without hitting us. And back in 1976 2010 XC15 came within 0.5 Earth-Moon distances without hitting us.

Could we be mistaken about the orbit of 2005 YU55? We have a very good idea of the orbit of this asteroid based on over 700 observations between 2005 and 2010. It's orbit was refined further when it was observed by the Arecbio radio telescope in 2010. Remember, we have a very good understanding of the orbital dynamics of asteroids, thanks to a gentleman called Newton. We are able to send tiny spacecraft across the trackless void to rendezvous with asteroids, something impossible if we could not predict their orbits with high precision.

But let's look at this another way, let's assume that our understanding of the orbit of 2005 YU55 was so bad that it could be within 50% of it's predicted position. Then at its closest it would be about 125,00 km away, well away from us, and no threat of collision. 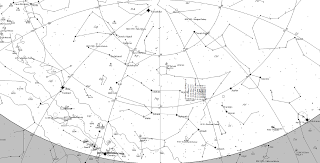 Chart of the sky as seen from Australia on 9 Nov from astronomical twilight on. Ticks show the asteroids position at half hour intervals. Click to embiggen.

It will be closest to us on November 8, 23:39 UT, this translates out to around 10:30 am AEDST on the 9th in Australia, still from astronomical twilight on the 9th Australian observers will be able to see it scream along low above the northern horizon.

With strong Moonlight, you will need at least a 6" scope to be able to see the 11-12th magnitude asteroid (remember unaided eye visibility threshold is around magnitude 6 without moonlight, and in binoculars under moonlight you are pushing to g below magnitude 8, unless you have super tripod astronomical binoculars), and it moves so fast you will be ale to see it move visibly against the background stars as you watch.

The closeness of the asteroid means that it's elements break most planetarium programs (eg. Stellarium puts the asteroid in completely the wrong position, and SkyMap is a little off). You will have to generate a topocentric ephemeris from the using the MPEC ephemeris generator, if you enter the latitude and longitude of your site, into the box in the ephemeris generator it will create a correct topocentric ephemeris for your site. My GRAS observing tips are here, and more observing tips here.

Are you sure you are correct? I know even if the asteroid was going to impact the Earth the info would have been kept secret. Or am I wrong? I know I am a little afraid about what could happen. Should I be? I am also not sure about the wiki articles, many times these articles are not accurate.

Sounds like you work for NASA's disinformation group. You are so funny, no one is buying what you are selling.

Anonymous#1 Yes, we are sure. As I said, the orbits have been worked out from over 700 observations from amateurs and professionals alike. Newtonian dynamics are very well understood, every year we observe thousands of objects, and we can even account for the minute deviation caused by uneven heating of the surface of these objects. As I said the accuracy and precision of our ability to correctly predict these orbits allow us to send spacecraft to them, where even small errors in the determination of the asteroids orbit will mean the spacecraft misses.

Not only that, as hundreds of amateurs have observed and calculated the asteroids path, if something was untoward the amateur community would know (and we aren't known for keeping silent).

As I type, amateurs are gearing up for an intense observing campaign to complement high resolution radar imaging of the asteroids surface. These asteroids are scientifically interesting, and you should not be even the tiniest bit afraid.

The two Celestia images at the top of the article show the *radius* as 400m. Isn't that its diameter?

AHRRGGG - reading/proof reading fail. the RADIUS should be 200 Km, not 400. thanks for picking that up.

Thanks, I very much appreciate the info:)
Anonymous#1

Mercury and Venus in the Head of the Scorpion
Carnival of Space #221 is here.
Southern Skywatch November 2011 Edition Up
The Sky This Week - Thursday November 3 to Thursda...
When bottle rockets go wrong
Alternative Medicine in the Adelaide Advertiser
When an Eminent Historian Writes on the History of...
Opposition of Jupiter, October 2011
The Scale of the Solar System by Car
My New Poster