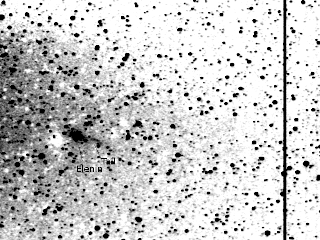 So what is happening? What is most likely going is that the bast of energetic solar wind particles has eroded exposed "ices" (water and carbon dioxide) creating the brief highly active tail (comet Elein has had a small but nice tail for some time). With these exposed ices gone, the generation of dust and gas drops off and the magnitude drops. UPDATE: Jakub Cerny thinks it is more likely due to depletion of particles in the inner coma, causing dimming that way. Also see Michael Mattiazzo's latest images here, showing what looks to be an elongated nucleus.

Elenin is a new comet, this is the first time it has dropped in to the inner solar system from the Oort Cloud. New comets generally are bright early than drop off quickly as their surface ices are depleted. Older comets tend to be brighter due to fissures and cracks penetrating more deeply into the comet allowing more volatiles to be accessed.

What does it mean for the future? Comets, despite the images of them that look like asteroids, and quite fragile, loose agglomerations of dust and ices smeared together. It has already been suggested that Elenein will not survive perihelion. This recent dimming of Elenin suggests it may be sufficiently fragile to evaporate as it passes close to the Sun, astronomers will be watching this small but cute comet as it plunges towards perihelion for more clues about the structure and dynamics of comets.

Your explanation about comets
is a refreshing departure from
the Doom and Gloomers who quite
frankly frighten those who are
less informed.

Keep up the good work.

Yes, your article will be refreshing to those less informed even though it may be absolutely wrong. You get an A for effort for being appeasing.

The EU theory suggests Elenin just attempted to complete its circuit with the sun but failed and lost some charge from its coma in the process. The loss of charge caused the dimming and elongation to appear.

I suspect Elenin is not done. Elenin will try to connect again when closer and may not short out like it did with the overload it received from the CME.

They may be no doom except for astronomy and their icy snowball theory.

Anonymous, let us know when you get a peer-reviewed paper out showing the proper physics and math behind that theory.

come on fells...we're on the same rock therefore the same team....correct?