Comet Elenin is NOT a satellite of a Brown Dwarf Star 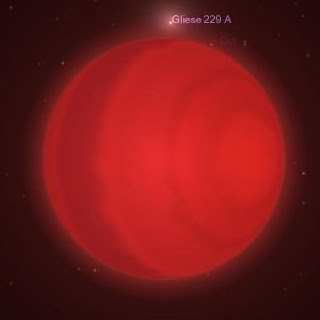 The T class Brown Dwarf Gliese 229B, visualised in Celestia near its primary star, Gleiese 229 A.

Space is big, you think it’s a long way to the shop if you want a sausage roll, but compared to space it’s nothing [1]. Against this vastness our sense of scale is confounded.

An example of this came this week when a correspondent asked me about my observations of comet 2010 X1 Elenin [2]. One of the prominent internet memes going around at the moment is that Elenin is actually the Moon of a Brown Dwarf star or a Brown Dwarf star itself (often claimed to be 4 times Jupiter’s size). I was asked if I could look out for something dim close to Elenin.

There is just one problem, a Brown Dwarf close to Elenin would be very bright. 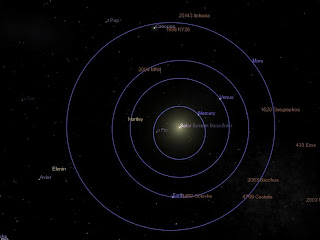 Elenin currently is just outside the orbit of Mars (visualised in Celestia, click to embiggen)

Brown Dwarf stars are stars that have only a few times the mass and radius of Jupiter; they are too small to start hydrogen fusion, although they may run for a short while on deuterium fusion. They are typically quite cool compared to main sequence stars, and emit very little visible light.

From a distance of a few light years or more they are invisible to optical telescopes. To find these dim almost-stars, we need to look with infrared sensitive telescopes. For example the WISE telescope had as one of its missions surveying for Brown Dwarfs. The coolest Brown Dwarf so far discovered by WISE is WISEPC J045853.90+643451.9 which is over 18 light years away. With a temperature of 600 K it is hot enough to melt lead and tin, but is totally invisible to our current optical telescopes

But while these almost stars produce very little visible light of their own, they reflect light perfectly well. If you go out in the early morning and look to the north-east, you will see a bright object well above the horizon (brighter Venus is well below it). That is Jupiter, a failed Brown-Dwarf, which we can see just fine.

Elenin is currently just outside Mars’s orbit, we can easily calculate how bright an object 4 times Jupiter’s size would be at that distance using the formulas here. I’ve put my calculations up on Google Docs for people to play with (click this link for access to spreadsheet [3]). 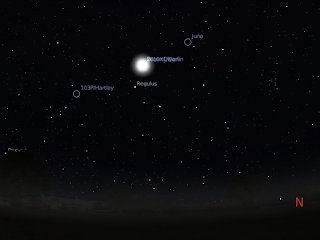 Simulation of what a Brown Dwarf would look like in the sky tonight if it was near comet Elenin's current position. I've used Stellarium's cometary body codes, using a dark, non-luminous object with 4 times Jupiter's diameter. It would be kind of obvious.

If a Brown Dwarf with a surface much darker than the Moon was at Elenin’s distance (as of June 1), it would have a magnitude of -6.5.

This is much brighter than Venus, bright enough to cast shadows at night and bright enough to be easily seen in daylight. This is an under estimate, as a Brown Dwarf would be more likely to be more reflective, more like Jupiter. An object 4 times Jupiter’s size just outside Mars’s orbit would also be visible as a small disk (you can do the calculations for this one as an exercise for yourselves, see the Stellarium simulation above). 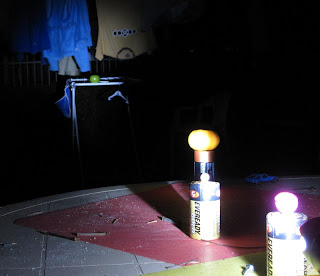 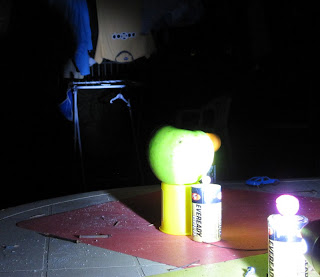 Brown Dwarfs are only invisible to us because they lie deep in the vasty dark, away from any light sources that can illuminate them. This is what causes confusion for some folks. Brown Dwarfs themselves produce little or no visible light but they are perfectly capable of reflecting light, as does Jupiter.

Here’s a test you can do yourself with a torch an some pieces of fruit. I’ve scaled the solar system so that 1 AU (the distance from Earth to the Sun) is 10 cm from the torch I’m using as the Sun. Mars’s orbit lies 25 cm away, Jupiter’s orbit is 62 cm away and Pluto’s orbit is 4 meters away. The orbit of the hypothetical planet Tyche would be two blocks away, and the nearest star, Proxima Centauri, lies 2.7 km away on the other side of Taperoo. I’ve used a lillypilli for Earth, a mandarin for Jupiter and an apple for a Brown Dwarf (see diagram above).

Strictly speaking, if I wanted to scale the diameters of the planets to the scale of the solar system, then I would have used 1 meter for 1 AU, them the Brown Dwarf would be 2 mm in diameter (I leave it as an exercise for the reader to test this themselves).

As you can see, when the non-self luminous “Brown Dwarf” is at Pluto’s distance, it is fairly dim, but when we move the “Brown Dwarf” to just outside of Mars’s orbit, it is quite bright. The atmosphere of a real T class is probably as reflective as a Granny Smith (but more a Magenta colour). Such an object would be readily visible in the night sky.

Summary: So, as you can see, it is impossible for Elenin to be a moon of a Brown Dwarf star (also we would have noticed its orbital motion by now) or a Brown Dwarf itself.

UPDATE: Leonid Elenin himself has done a simulation of what would happen to solar system orbits if a Brown Dwarf passed though. It would be quite obvious.

[1] Obligatory Douglas Adams homage, with added AC/DC.
[2] I haven’t got any yet, either I’ve got the time wrong and the comet has set, or the observatory is closed because of bad weather.
[3] Note that for the H calculation Do is in Km, but for the magnitude calculation, Do is in AU. The calculated magnitudes of Venus, Jupiter and Neptune agree with their observed magnitudes.

I cannot see a reason why Elenin couldn't be a satellite of a brown dwarf. It's eccentricity is slightly bigger than 1, so it is not bound to the sun. Considering that a brown dwarf were a body in the Oort cloud, it could be that another body orbiting the brown dwarf disturbed its orbit and sent the commet straight to inner solar system.

Based on information available, how is it that an amateur astronomer like Leonid Elenin could even spot C2010? And why isn't NASA taking credit for discovering it way back in 1983 - when NASA released a white paper on it?

LottaQuestions said... Based on information available, how is it that an amateur astronomer like Leonid Elenin could even spot C2010?

The same way any amateur spots a comet, a good telescope, a good knowledge of the sky, patience and dedication. Most amateurs hunt for decades to only discover one or two. I'll never discover a comet because I'm too easily distract- OH SHINY.

These days, most comets are picked up by automated systems like LINEAR, but these don't cover all the sky, or always look in the right spot at the right time, so amateur astronomers still get to find comets.

And NASA, NASA doesn't hunt for comets. Nor is it the sole arbiter of all things astronomical. Some of it's missions (eg WISE), do pick up comets, but that's not their primary objective.

NASA did not discover Elenin in 1983. See http://www.badastronomy.com/bad/misc/planetx/science.html#iras for the story of what did occur.

What if C/2010 X1 is a black star. I understand that a theoretical impossibility but let's break the rules and imagine. What would that be like?

Joe Baptista said... What if C/2010 X1 is a black star. I understand that a theoretical impossibility but let's break the rules and imagine. What would that be like?

We would see the accretion disk glowing brightly, it's x-ray output would show up in x-ray observatories and asteroid 1999 RQ176 would have been sucked into its event horizon.