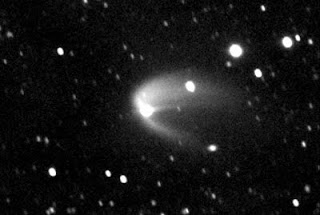 Back in December 2010 the Catalina Sky Survey picked up a remarkable comet-like outburst from the asteroid 596 Schelia. Multiple observers soon confirmed this outburst, including several members of the Global-rent-a-scope community.

If you want to see some good images of the comet-like coma around 596 Scheila, here is Martin Moberly's image taken on G-11, J-F Soulier's images, W-T Hsu's images, and Joseph Brimacombe has some amazing animations here and here, as well as some great images (my own images were pretty ordinary).

Scheila is a 113 Km diameter rock, one of 4 "T" class asteroids, which have a number of comet like features and are related to "D" class asteroids, which may be captured Kuiper belt objects. Scheila joined a growing list of asteroids like 3200 Phaethon which have shown comet-like characteristics. The question hotly debated at the time as whether this was a true outburst of buried cometary material, or the results of an impact. The asymmetric plumes of material were puzzling, and not entirely consistent with a cometary outburst. 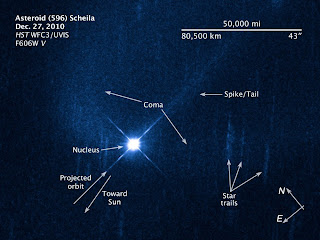 A recent publication (PDF here) may resolve this debate. Shortly after the outburst was announced, the spacecraft SWIFT used its Ultraviolet/Optical Telescope (UVOT) to capture multiple images and, most importantly, a spectrum of the asteroid.

A cometary outburst sends a mass of dust, gas and water vapor into space. Ultraviolet sunlight then breaks up the water into hydroxyl and hydrogen. Other gases are also transformed into compounds with a characteristic UV-spectra. But none of the emissions most commonly identified in comets, such as hydroxyl or cyanogen, show up in the UVOT spectrum.

The combination of dust distribution and spectra strongly suggests that what we saw was the result of an asteroid collision, rather than a cometary outburst. This is pretty amazing, the chance that we would see the aftermath of an asteroidal collision before the dust settled, so to speak, is pretty slim. Two months after the first observation the dust tail had dissipated.

"The Hubble data are most simply explained by the impact, at 11,000 mph, of a previously unknown asteroid about 100 feet in diameter," said Hubble team leader David Jewitt at the University of California in Los Angeles. Hubble did not see any discrete collision fragments, unlike its 2009 observations of P/2010 A2, the first identified asteroid collision.

Amateurs played an important role in monitoring Scheila, for example the time sequence of J-F Soulier's images show the evolution of the coma. The SWIFT spectra result was anticipated by this spectrum at John Menke's site, which looks like a lot of dust, as well as susequent amateur and professional spectra (as detailed at J-F Soulier's site ). Given that the Global -rent-a-scope community played a role in confirming and monitoring the activity of 596 Schelia, these results should be of great interest to them. What would have been nice would have been a way to collate all the amateur images and spectroscopic results to systematically follow the evolution of the outburst.

Centauri dreams has a good discussion of the paper, and NASA has produced a really great video that explains the findings.