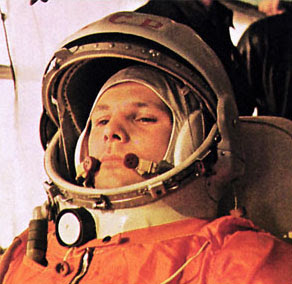 On Tuesday 12 April it will be the 50th anniversary of Yuri Gagarin's historic flight into space. Yuri's Night celebrates this event.

There will be events worldwide and here in Adelaide there will be a free movie at 7:00 pm on Tuesday 12th April 2011 in the Kerr Grant lecture theatre, Physics building at the University of Adelaide.

...film maker Chris Riley of In the Shadow of the Moon fame has teamed up with the European Space Agency and the Expedition 26/27 crew of the International Space Station, to create a new film of what Gagarin first witnessed fifty years ago. By matching the orbital path of the Space Station, as closely as possible to that of Gagarin’s Vostok 1 spaceship, and filming the same vistas of the Earth through the new giant cupola window, astronaut Paolo Nespoli, and documentary film maker Christopher Riley, have captured a new digital high definition view of the Earth below, half a century after Gagarin first witnessed it. Weaving these new views together with historic recordings of Gagarin from the time (subtitled in English) and an original score by composer Philip Sheppard, they have created a spellbinding film to share with people around the world on this historic anniversary.

The film is sponsored by The Australian Institute of Physics and the Adelaide Section of the American Institute of Aeronautics and Astronautics. For more information email Scott Foster.