Let the Moon be Your Guide 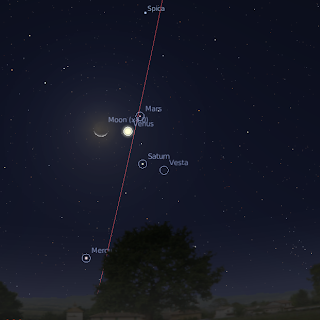 So I gave a talk at the Bellevue Heights Junior Field Naturalists Club. I was giving a talk to a group of 6-9 year olds and their parents on astronomy on a night when the sky was so cloudy no hint of the full Moon. For Field Naturalists you would want to get them out in the field doing things: looking at the stars, finding south, measuring the Moon for the Moon illusion and that sort of thing.

But with the the sky clouded out, how was i going to keep 30 or so active youngsters entertained for 45 minutes or so?

I had a theme "Let the Moon be Your Guide" and the main aim was to a) use something big and obvious to help find interesting objects and b) show that you don't need fancy equipment to see interesting in the skies. So I made some scripts in Celestia and Stellarium showing the Moon near interesting objects.

I also had some pictures of the Moon, a a big soccer ball (the Earth), a small soccer ball (the Moon), and a very big torch (the Sun) to demonstrate Moon phases. The kids were fantastic, they were enthusiastic and not afraid to talk about things. I had enthusiastic assistants to hold the Sun, Moon and Earth and demonstrate orbits and phases. I put up a picture of the Moon and had them find the Man, Lady and Rabbit (the also saw Crabs and Snails, and heck, they were right). I handed out star maps (but forgot to explain how to use them - blast!). The kids seemed to enjoy themselves, I certainly did (Thanks Rona for inviting me! and the kids for their infectious enthusiam).

As you know I'm a fan of using the freeware programs Celestia and Stellarium. I've put up the scripts for you to download and play with; download Moons.cel and put it in your Celestia folder, then use File | Open Script to run it. Download The Moon Guide and put it in scripts folder (unfortunately, it's version 0.9 script, I'll translate it to 1.03 later).

Comments:
Hi Ian, Well done, I have difficulty keeping my kids interested in a phases of the moon demonstration, even when they've just asked the question.

Out of interest, what Stardate is that plantery alignment ?

The Planetary alignment is 13 August, 2010 (you can run the Stellarium simulation to see that shot).

Getting kids to hold and move things things helps to keep them interested for a tad longer.