Image Credit NAOJ
Cool is a relative thing, in this case the "cool" planet is actually between 280-370 degrees Celsius, not a place for the summer holidays. But most of the exoplanets we've found scream around close to their suns, and have temperatures of between 500-800 degrees Celsius.

At around 29 AU from its sun GJ 758, a near identical twin to our own, the exoplanet is roughly where Neptune orbits. However Jupiter, which produces more heat than it receives from the Sun, is nowhere near this hot.
However, the mass of GJ 758B is between 10-40 times that of Jupiter. This is too low for nuclear fusion, but a range of gravitational and non-gravitational effects mean that these large exoplanets are intrinsically hot. At the large end of the mass estimate, the planet would actually be a failed star, a brown dwarf. Despite being more massive, the diameter of GJ 758B is similar to that of Jupiter. 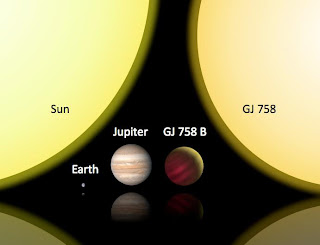 Image credit NAOJ
This planet was the first detected by the planet hunting telescope Subaru, using interfereometry to cancel out the light of the primary star. It is the fourth star that has been detected optically (see here and here for infomation on the other 3).
GJ 785B moves fast enough that we can follow its orbital dynamics, and is in an orbit similar to the gas giants of our solar system around a sun-like star (previously imaged planets are around non-sun-like stars or have non-solar system like orbits). It's also well positioned so that we can analyse its atmosphere. It's location also will also us to test theories of how massive planets form (core accretion vs direct gravitational collapse). Very likely Subaru will come up with more exciting exoplanets in the months ahead.
The published paper on this planet is Thalmann, et al “Discovery of the Coldest Imaged Companion of a Sun-Like Star,” Astrophysical Journal Letters, published online 18 November 2009 (see abstract here). (Hat Tip Centari Dreams)

Geminid Meteor Shower 13-14 December 2009
Woooaaah! Freaky Man!
Another Comet Heads for the Sun
Carnival of Space #132 is here.
Astrology - the face off.
Various Bits Of Good News
The Sky This Week - Thursday December 10 to Thursd...
Unexpected Rainbows (Part 9)
... and the radio waves carried a voice from afar.
Some Light Housekeeping