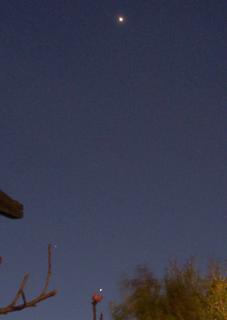 As always, click to enlarge, Venus is up the top, Jupiter is bottom right just above a peach blossom, and Spica is bottom right, near a peach branch. The "star" visible in the full size version between Jupiter and Spica is an artifact.
With all the bad weather stopping us from seeing any aurora (or me from getting any images of sunspot 798/808, which is decaying as it moves off the Sun's face), we also didn't get to see Venus as it moves away from Jupiter and Spica. The clouds finally broke in the late afternoon, allowing me to get this image. This image was not without its hazards, the Bettdeckereschnappender Weisle had just put down lawn feeder. The smell was, well, very, very bad and one had to tread carefully to avoid the stuff getting on your shoes (or camera tripod). The peach tree framing Jupiter and Spica is one she has just put in. Unfortunately it will soon block out my views to the west, so limiting my astrophotography in that direction (and co-incidentaly destroying the fence it is hard up against, but I didn't win that argument).

Venus is on its way to its meeting with alpha Librae (Zubenelgenubi, what a name) on the 24th and 25th of September. Jupiter is beginning to line up with Spica, and in early October it and Mercury will have a close encounter.

Titan's Seas found?
Next Monday is International "Talk Like a Pirate" day
So why does it happen?
..but then nothing much happened.
Did I mention it was cloudy?
Waiting for Aurora
X Class Flare CME now expected to arrive Thursday 15
More X Class flares
The Moons of Mars
More Sunspot 798 and the Grunaiad on Sicence