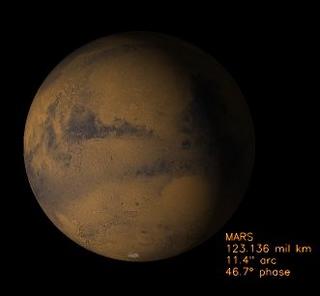 Image generated by the Solar System Simulator
I've had several queries about an circulating email claiming that Mars is going to be as big as the Moon to the naked eye in August. It's a hoax, and one that has been circulating since 2003, during the Great Opposition of Mars. The opposition of Mars in 2005 will be on November 7, not August, and Mars will appear like a bright star to the naked eye, although even small telescopes will reveal a disk and some markings. I've put up my 2005 Mars Opposition page with observing hints, spotter maps, links to interesting Mars sites and an ephemeris for those interested in observing this years opposition.

Comments:
I knew I should have visited here before I did my Mars post. Would have saved me some work. Ha, that'll teach me.

There can never be too many Mars posts.

Shuttle to stay in space a day longer
A third Transneptunian Object
Aurora? not yet.
Massive Solar Flare - Aurora to come
More Big TNO's
Bigger than Pluto?
Shock! Water found on Mars!!
Meteorite hits tractor
Looks like the Shuttle is safe.
Andy in the Sky with Debris