The New Moon is Tuesday December 15. The bright planet Venus is low in the twilight morning skies and is visited by the crescent Moon on the 13th.  Three bright planets dominate the evening sky with Mars, Jupiter and Saturn making the evening skies stunning. Jupiter and Saturn form a spectacular thin triangle with the crescent Moon. Geminid meteor shower morning of the 14th.

The New Moon is Tuesday December 15. The Moon is at perigee, when it is closest to the Earth, on the 13th. 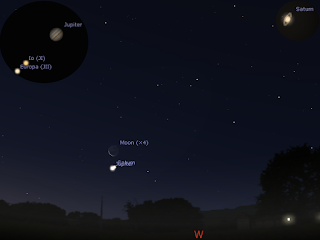 Evening sky at 21:33 ACDST (60 minutes after sunset) on Thursday, December 17 facing west as seen
from Adelaide. The pair of Jupiter and Saturn are above the western horizon close to the thin crescent Moon.  The pair are visibly closer now, and fit within a wide-field telescope eyepiece, heading for their spectacular meeting next week. 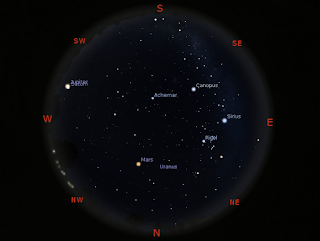 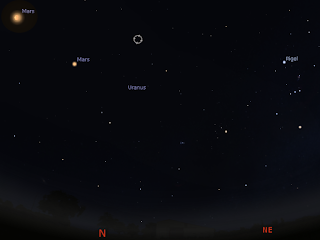 Evening sky at 22:10 ACDST  (90 minutes after sunset) on  Saturday, December 12 facing north as
seen from Adelaide. Mars is above the northern horizon near the variable star Mira (indicated by the circle). Mars is past opposition, but is still excellent. more details here.
The inset shows the telescopic view of Mars at this time. Similar views will be seen elsewhere in Australia at the equivalent local time (90 minutes after sunset), click to embiggen. 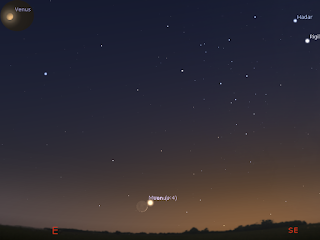 Morning sky on Sunday, December 13 showing the eastern sky as seen from Adelaide at 5:05 am ACDST (45 minutes before sunrise). Venus is getting lower to the horizon and is close to the thin crescent Moon. You may need a level, unobstructed horizon to see this. 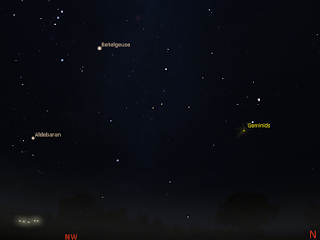 Geminid radiant seen facing north in the southern Hemisphere at 4:00 am daylight saving time, December 14.The radiant is marked with a starburst (click to embiggen).

The Geminids are a fairly reliable meteor shower, with rates of about a meteor per minute at their best. This is a good year for Geminids, as the New Moon will not interfere.

The Geminids have a broad peak and will normally show good activity well before and after the peak, and on the day before and after. Australians should see a meteor every 1-2 minutes under dark skies in the early morning of the 14th, between 2:00 am and 4:00 am.

Venus is still visible low above the horizon in the morning. Venus is visited by the crescent Moon on the 13th. You may need a level, unobstructed horizon to see this.

Mars is readily visible in the evening sky above the north -eastern horizon in the early evening. Mars is close to the variable star Mira, which is still reasonably bright. Mars was at opposition, when it is biggest and brightest as seen from Earth, on October the 14th, but is still worthwhile observing. Observing details and more at the Mars Opposition site.
Jupiter can be readily seen in the early evening sky in the west. Jupiter and Saturn start out two finger-widths apart at the beginning of the week but slowly draw closer heading for their spectacular meeting next week. The pair are prominent in the early evening skies along with Mars.On the 17th the thin crescent Moon meets up with the pair. All three objects can fit into a binocular field, and Jupiter and Saturn fit into the field of view of a wide field telescope eyepiece.
Saturn too is visible in the early evening skies in the west and is also still an excellent sight.
Printable PDF maps of the Eastern sky at 10 pm AEST, Western sky at 10 pm AEST. For further details and more information on what's up in the sky, see Southern Skywatch.