The Asteroid 4 Vesta is one of the iconic minor planets, and one of two orbited by the Dawn spacecraft. Importantly at favourable oppositions Vesta is bright enough to be seen with the unaided eye under dark sky conditions. 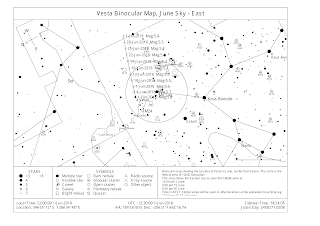 Vesta will be potentially visible under dark sky conditions. While it is substantially above the magnitude 6 limit for unaided eye visibility, local sky conditions, the number of stars of similar brightness, interference from moonlight and how good your eyesight is may conspire to make it difficult to see. It is however easily visible in binoculars, and if you locate it in binoculars first it will be easier to pick up. You may need to watch it over several nights to see it move and confirm its identity.

On the other hand this year Vesta has some excellent signposts to it, early in June it can be triangulated using Saturn, Mu Sagittarii, the star that forms the “lid” of the teapot of Sagittarius and Kaus Australis at the top of the teapot and the brightest star just above Saturn.

For the first half of June, sweep north from Saturn until you reach the last obvious brightish star, this is Mu Sagittarii, just beyond and blow this is the obvious and rambling open cluster M24. Just above M24, almost in line with Mu Sagittarii the brightest object visible is Vesta. You may need to watch it over several night to see it move to ensure you have the right object.

From around the 14th sweep up from Mu Sagittarii to the iconic and beautiful Trifid nebula, then sweep across (north) to the dim open cluster M23. Vesta will be near this cluster.

While Vesta will be at opposition on the 20th, it will be brightest from the 19th to 22nd. Unfortunately by then the waxing Moon will begin to interfere, but if you find a large object to block the Moons light out and preserve your might vision, you should have no problems seeing Vesta.