The New Moon is Thursday December 29. Bright ISS pases for Christmas! Venus is prominent in the evening sky in the star poor regions of Capricornius. Mars is just above Venus coming close to Neptune. Jupiter and the bright star Spica are close in the morning skies and visited by the Moon on the 23rd. Saturn and the Moon are close in the morning skies on the 28th. Comet 45P is a telescope object in the early evening skies.

The New Moon is Thursday December 29. The Moon is at apogee, when it is furthest from the Earth, on the 25th. 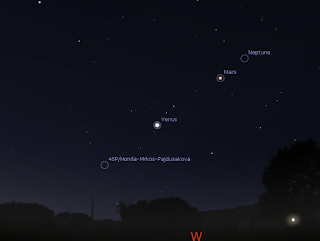 Evening sky on Saturday December 24 looking west as seen from Adelaide at 21:38 ACDST (60 minutes after sunset). Venus and (now dim) Mars form a line with (binocular only) comet 45P and Neptune. Similar views will be seen throughout Australia at the equivalent local time. (click to embiggen).


Venus  is high in the dusk sky and intensely bright. It can be seen easily from somewhat before half an hour after sunset to over two hours after sunset. It stays dazzlingly brilliant above the horizon in truly dark skies well into the evening. Venus has been mistaken for flares or landing aeroplanes it is so bright now.

Venus is in a very star poor field, but on the 28th it is close to the bright star Deneb Algedi.
Venus is a distinct "half Moon" shape in telescopes.


Mars is in the western evening skies in  Aquarius. Mars remains in a star poor area, but is coming closer to Neptune for a close approach on the 31st and 1 January. From the 25th Mars is in the same binocular field as Neptune (which will look like a colourless dot). You will need good binoculars (at least 10x50's under dark skies to pick up Neptune.

Mars was at opposition on May 22,  and is still visibly dimming. While still brighter than any of the nearby stars, it is much faded and not immediately obvious, It is no longer a modest telescope object. Mars is visible most of the evening setting before midnight. In small telescopes Mars will be a visible, but tiny, gibbous disk, however you are unlikely to  see its markings. 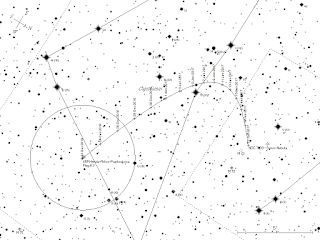 Black and white binocular chart suitable for printing, showing a higher power view of the area around comet 45P from 22 December to 21 January. Use in conjunction with the sky chart above. The circle is the field of view of 10x50 binoculars. Click to embiggen and print.

Comet 45P is around magnitude 8, bright enough to be theoretically seen in binoculars, however, it is very low to the horizon at astronomical twilight, and there is a very narrow window for observing it. It will look like a fuzzy dot in binoculars and small telescopes. The comet is not far from beta Capricornii, and the only fuzzy object in this area. 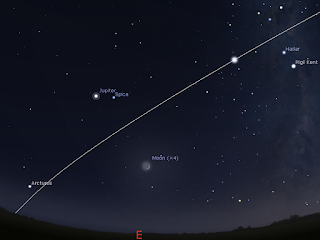 Morning  sky on Sunday December 25 looking east as seen from Adelaide at 4:55 ACDST.  The International Space Station shoots between the Southern Cross and the pointers, the comes close to Jupiter. (click to embiggen).

The International Space Station makes a series of bright passes in the morning  and evening, starting from the 23rd. Those who are up early to see what Santa has brought on the 25th can see a stunning morning pass near Jupiter, and in the evening there will be a brilliant pass going across the zenith from many places in Australia.

When and what you will see is VERY location dependent, so you need to use either Heavens Above or CalSky to get site specific predictions for your location. For more details see this post. 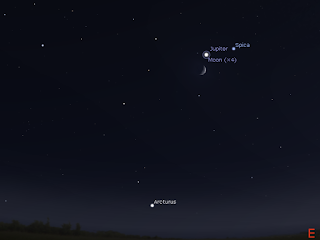 Morning  sky on Friday December 23 looking east as seen from Adelaide at 4:53 ACDST (just an hour before sunrise).  Jupiter is now high above the horizon and is in dark skies well before dawn. It is close to the bright star Spica and close to the Moon at this time. Similar views ill be seen elsewhere in Australia at the equivalent local time. (click to embiggen). 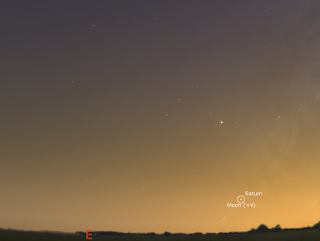 Morning  sky on Wednesday December 28 looking east as seen from Adelaide at 5:33 ACDST (half an hour before sunrise).  Saturn is just above the horizon, and just above the thin crescent Moon.Similar views ill be seen elsewhere in Australia at the equivalent local time. (click to embiggen).


Saturn returns to the morning twilight this week. Saturn is low to the horizon, and you will need a level, unobstructed eastern horizon to see it. Saturn is near the crescent Moon on the 28th.