The New Moon is Thursday February 19. Venus is prominent in the twilight evening sky. Mars is just visible in the early evening twilight and is coming closer to Venus. Jupiter is visible in the late evening sky and is just past opposition, when it is biggest and brightest in our sky. Saturn is in the head of the Scorpion, with the Moon nearby on the 13th. Mercury becomes prominent in the morning sky with the crescent Moon nearby on the 17th.

The New Moon is Thursday February 19. 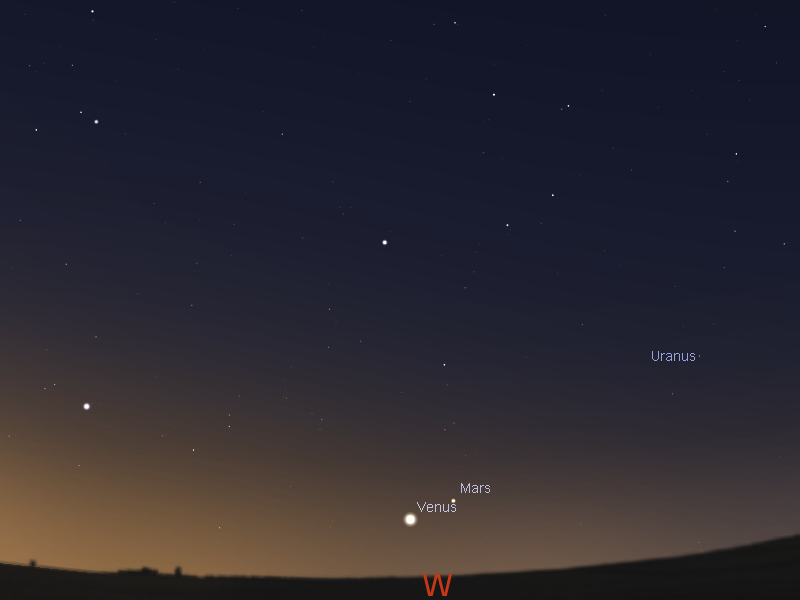 Evening sky on Saturday February 14 looking west as seen from Adelaide at 21:00 (9:00 pm) ACDST in South Australia.  Mars is low in the twilight, with Venus below it. Similar views will be seen elsewhere at the equivalent local time (click to embiggen).

Venus is easy to see low above the western horizon in the twilight. At civil twilight, half an hour after sunset, it is around one and a half hand-spans above the horizon. Venus is also three finger-widths below Mars.

Mars  is still seen low in the western evening sky, setting just around 9:30 pm daylight saving time (just before twilight ends). Mars is becoming harder and harder to see as it lowers deeper into the twilight, and you may need binoculars to pick it up. 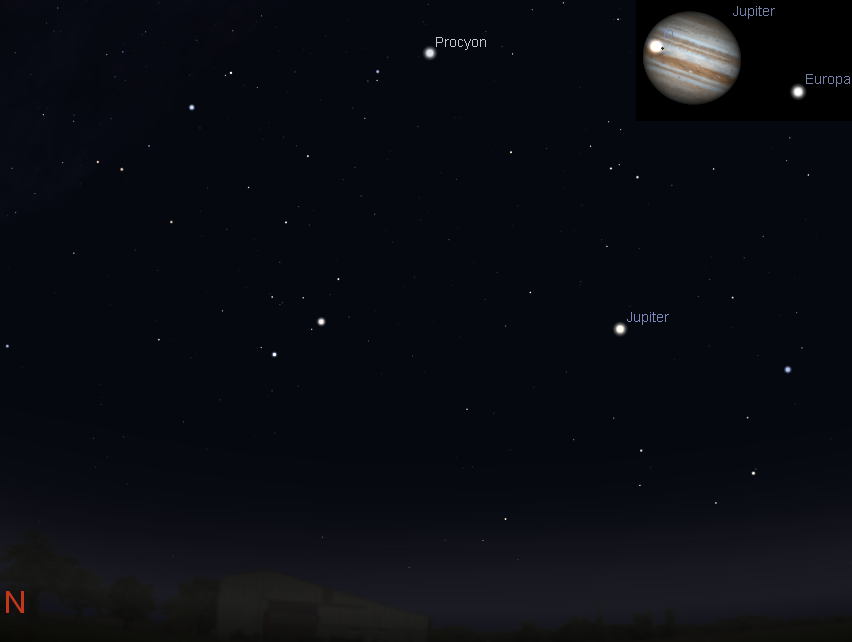 Evening sky on Saturday February 14 looking north-east as seen from Adelaide at 22:00 ACDST showing Jupiter.  The inset shows Jupiter's Moons at 22:00 on the 14th. Jupiter is the brightest object above the north-eastern horizon. (click to embiggen).

Jupiter  is now easily seen  in the late evening sky. It is the brightest object above the north-eastern horizon when twilight ends. It is not far from the bright star Regulus in the sickle of Leo (this forms the head of the constellation of the  Lion).

Jupiter was  at opposition, when it is biggest and brightest in our sky, on the 7th, but it will be an excellnet object for may weeks to come.  Jupiter is visible all night and is high enough for decent telescopic observation from around 11 pm, although its visibility will improve in the coming weeks. Jupiter's Moons will be putting on a good display in both binoculars and small telescopes. On the 14th Io and its shadow transits the face of Jupiter from around the end of twilight for about an hour, adn on the 17th Ganymede and its shadow transits from around 2:30 am. 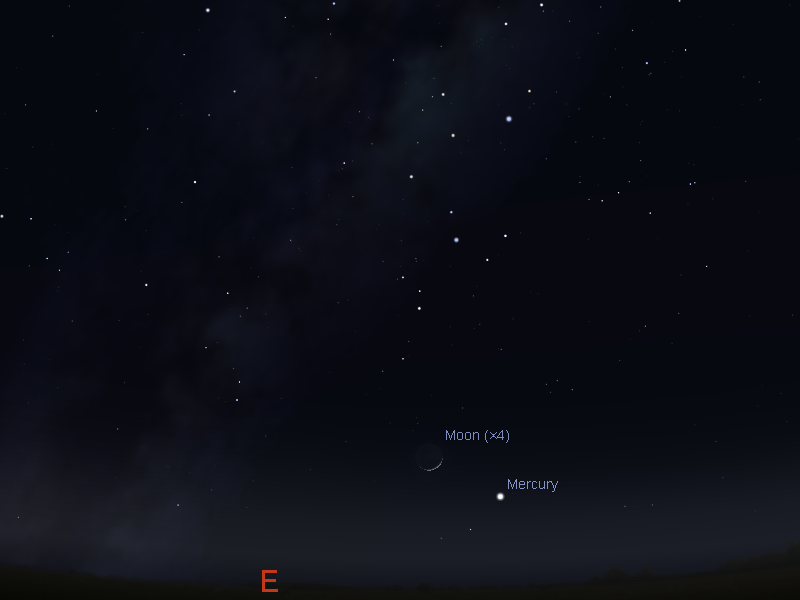 Morning sky on Tuesday February 17 looking east as seen from Adelaide at 5:30 am ACDST .   Mercury is below the asterism of the teapot. . The thin crescent Moon is close by. (click to embiggen).

Mercury climbs hight in the morning twilight and should be reasonably easy to see a hand-span above the horizon and hour before sunrise under the Teapot of Sagittarius. On the 17th the thin crescent Moon is close to Mercury.