The Last Quarter Moon is Tuesday January 13. Venus is prominent in the twilight evening sky with Mercury climbing towards it. Venus and Mercury are closest on January 11. Mars is visible in the early evening. Jupiter is prominent in the morning sky and is visited by the Moon on the 8th and 9th. Saturn rises in the morning sky. Comet C/2102 Q2 Lovejoy is easily visible in binoculars in the early evening is and visible to the unaided eye in dark sky sites. It is brightest on January 11.

The Last Quarter Moon is Tuesday January 13.  The Moon is at apogee, furthest from the Earth, on the 10th. 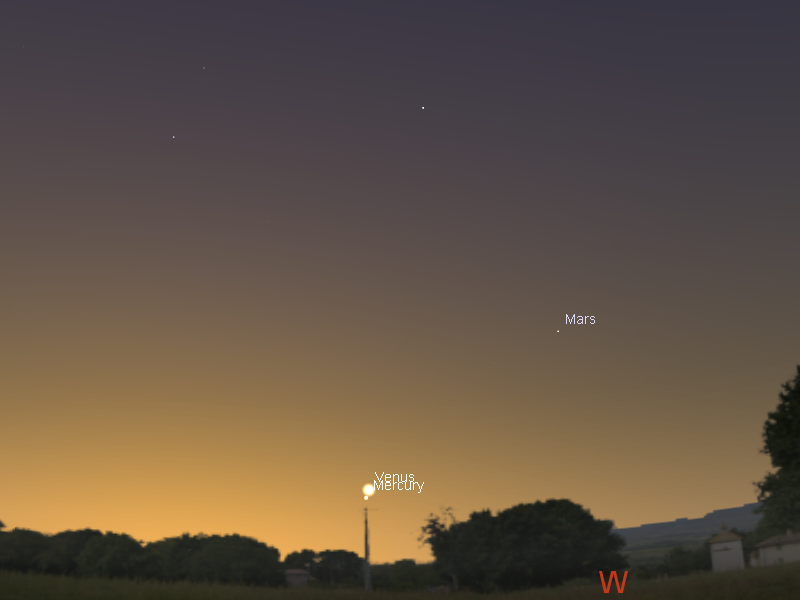 Evening sky on Sunday January 11 looking west as seen from Adelaide at 21:00 (9:00 pm) ACDST in South Australia.  Mars is high in the twilight, with Venus and Mercury very close together below. Similar views will be seen elsewhere at the equivalent local time (click to embiggen).

Mercury  is low in the twilight, not far from Venus. Venus provides a helpful signpost to finding Mercury. It is visible 40 minutes after sunset, although it might not be obvious at first. Look a bit below and to the left of Venus.

Mercury and Venus are at their closest on Sunday the 11th when they are just a finger-width apart. However the pair are nicely close for the rest of the week.

Mars  is still seen low in the western evening sky, setting around 10:30 pm daylight saving time (shortly after twilight ends). Mars was at opposition, when it is biggest and brightest, on the 9th of April, and is still  readily distinguishable as the bright red/orange object above the western horizon in the early evening just after twilight finishes. 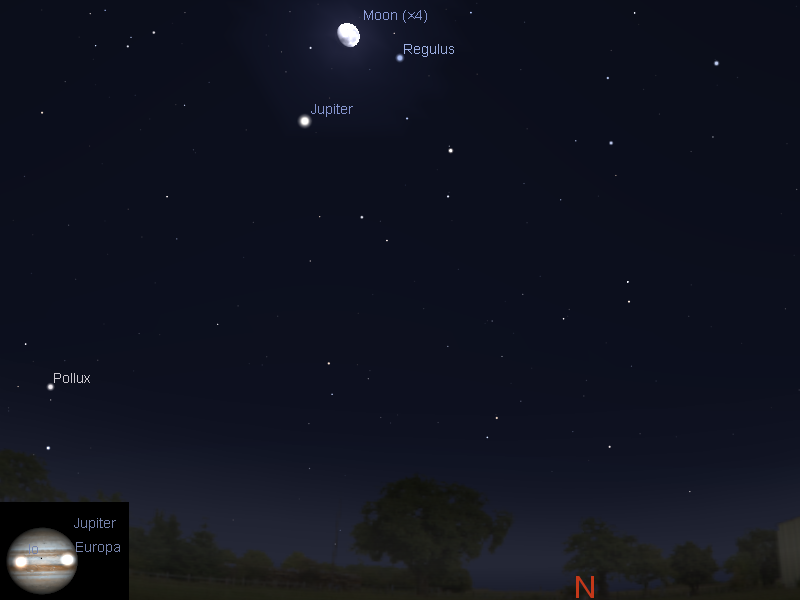 Morning sky on Friday January 9 looking north as seen from Adelaide at 5:00 am ACDST showing Jupiter.  The waning Moon is close to Jupiter at this time. The inset shows Jupiter's Moons at 2:00 am on the 14th. Jupiter is the brightest object above the northern horizon. (click to embiggen).

Jupiter  is prominent in the morning sky, and is easy to see above the horizon before twilight. Jupiter is the brightest object above the northern horizon. It is now not far from the bright star Regulus in the sickle of Leo (this forms the head of the constellation of the  Lion). On the 9th the waning Moon forms a triangle with Regulus and Jupiter.

Jupiter is now high enough for good telescopic observation before astronomical twilight. Jupiter's Moons will be putting on a good display, and there is transit of Io and Europa on the 14th, starting just before 1 am..

Jupiter enters the evening sky just after 10 pm daylight saving time, but is still best observed in the morning. 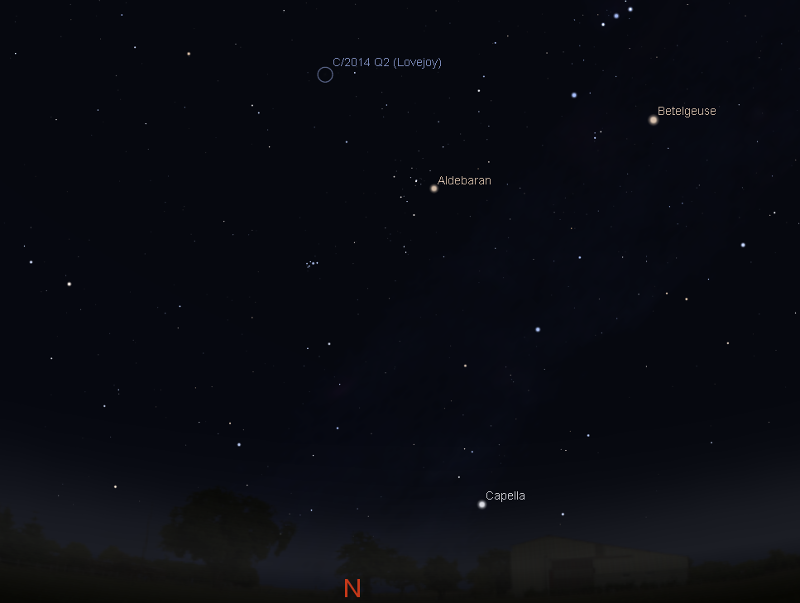 Evening sky on Sunday January 11 looking north  as seen from Adelaide at 22:00 (10:00 pm) ACDST in South Australia. Comet C/2014 Q2 Lovejoy to the left of Betelgeuse and above Aldebaran.  Similar views will be seen elsewhere at the equivalent local time (click to embiggen).

C/2014 Q2 Lovejoy is brightening in the sky and will be brightest on the 11th. The comet is passing Orion  heading towards Taurus.

While the comet is brightest on January 11, it is reasonably bright now (estimates between magnitude 4.0 and 4.5) and the rest of the week. It is easily visible in binoculars and people in dark sky sites have been able to see it with the unaided eye, it may even bee visible in suburban locations on Sunday. Binoculars or small telescopes show it as a definite fuzzy disk about a quarter of the size of the Moon. In modest sized telescopes the faint thin tail can be seen. Instructions on viewing the comet and printable finding charts can be found here.

The link to the local astronomical societies does not work...

Thanks for the heads up, they changed .HTM to .HTML. I have fixed the link. Many thanks!
http://www.quasarastronomy.com.au/societies.html