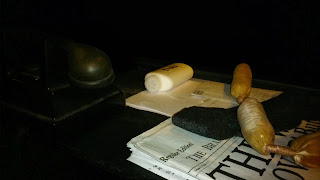 For my birthday the family bought me tickets to a performance of Einstein the Musical (actually, it was called Relatively Speaking), by John Hinton who previously did Darwin (with a catchy song about Barnacles, this is not it).

It was brilliant, with a rap song about E = MC2, and lots of audience participation.

The Bettdeckererschnappender weisel and I were chosen to act out time dilation (standing in foor the previous two audience members who were acting out vector addition), I got to hold a light saber, BDEW got a vacuum cleaner named Hette, she was not amused, and muttered about 21st century role models, but we were informed it was 1936, so that didn't apply).

It was an absolute hoot, the last show is tomorrow, why not go along?

(PS, do I need to tell you I have the best family ever?)