This time when I got up for the Geminids at 3:00am the skies were brilliantly clear. Unfortunately the Moon was also higher than yesterday, making the sky bright for the first half of my observing. My limiting magnitude was 4.5 before Moonset (3:36 am) and 5.5 after. I looked basically North, using Jupiter as my reference, sweeping east and west from there, encompassing an area from Orion ,through Canis Major to Leo.

Between 3:00 am - 4:45 am ACDST I saw 9 Geminids (with 3 nice fireballs, one that zoomed below the sickle of Leo and the other shooting towards Taurus), 3 sporadic meteors and 5 satellites. Two satellites were close as they zoomed through Orion (one was likely ISIS 1), and another two crossed paths between Sirius and Procyon

Nova Centari was bright, at least 3.5.

Below is the breakdown of my observing, in 15 minute segments, from 4-4:15 I was also imaging Nova Centauri 2013, so I was not as effective watching for meteors as in the other time periods. 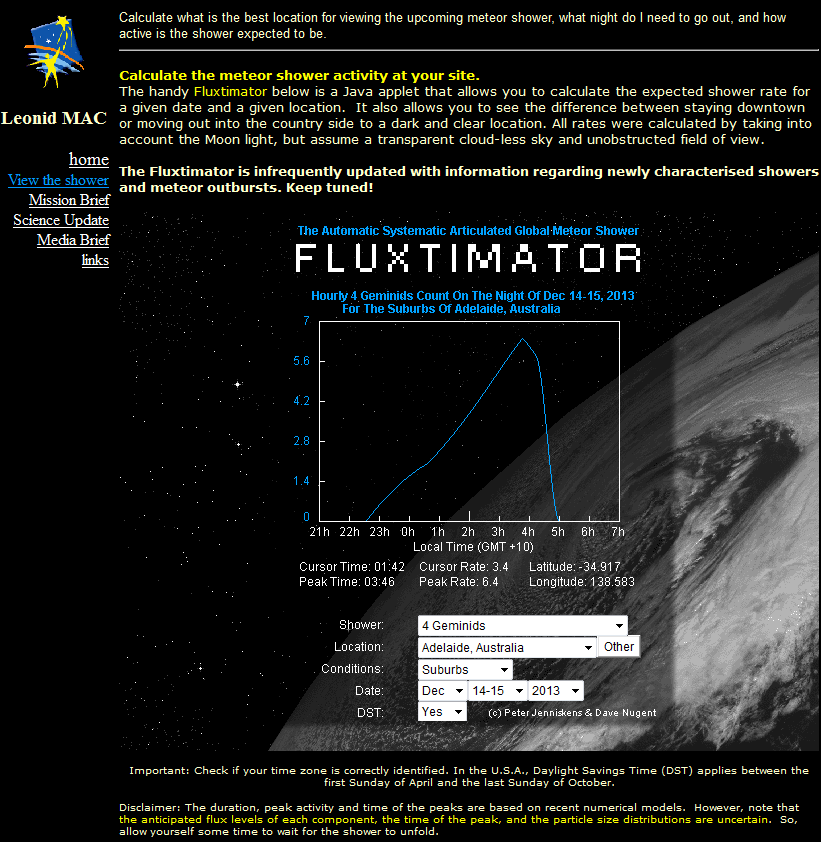 The 6 meteors seen between 3:07-4:00 is consistent with the predicted numbers for my site (6.4)  from the meteor flux estimator.

With the radiant 21 degrees above the horizon at my location, a limiting magnitude of 5 (averaging before and after Moonset), and something like 80% of my field of view unobstructed, I come up with a ZHR of 67 in the hour between 16:30 UT and 17:30 UT, which is consistent with the reported ZHR of 64 for 16:47 UT.

This is also consistent with the reports I have seen from South Australia (14-15 meteors in darker sky sites than mine). Other Australia sites were plagued by cloud.


In the northern hemisphere, where the radiant is higher,

All in all, not a bad Geminids, not as good from an Australian perspective as other years, and not as good as this years Aquariids, but not bad none the less.

Comments:
We were luckier here in Gove Ian, with 101 in 1 hr 20 Minutes !
http://everythingastronomy.com/geminids-meteor-shower/