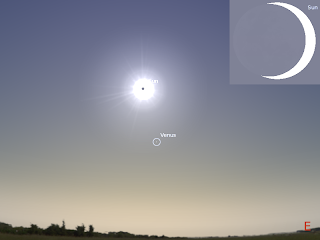 Partial Eclipse as seen from Cairns at maximum eclipse, 8:48 am AEST on May 10.

Southern Skywatch is 15! Well, 15 and a bit. The first edition was produced on 1 April 1998. It seems like only yesterday that I started.

The original inspiration for Southern skywatch started with some occasional sky watching notes I posted to the Australian ABC's "Science Matters" discussion group. Ian Allen of the ABC science online group suggested that I write a monthly web page and the ABC kindly provided some logos and images and a link, and the rest was history.

I've had a great 15 years and hope to be doing Southern Skywatch for many more. I'm working on some ideas to celebrate this anniversary, so keep tuned!

There's quiet  little bit  of planetary action this month with Jupiter, Venus and Mercury meeting, there is also an Annular Eclipse, a meteor shower and an occultation.

Saturn was  at opposition in April, but it is still big and bright this month.  On March 23 the Moon  is close to Saturn

Jupiter is in the evening sky near the Hyades. Jupiter is now very low in the western sky. On the 12th the crescent Moon and Jupiter are close. Jupiter is close to Venus and Mercury on the 26th and 27th, and only a fingerwidth from Venus on the 28th.

The star Spica is occulted on the 22nd, seen from north-eastern Australia. Everywhere else sees Spica very close to the Moon.

There is an Annular Solar Eclipse on the morning of the 10th in remote northern Australia, the rest of Australia seen a nice partial eclipse..