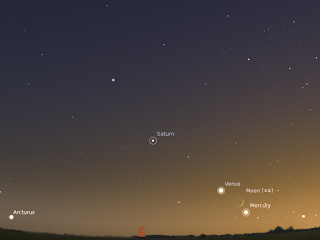 Morning sky on Wednesday December 12 looking east as seen from Adelaide at 5:15 am local daylight saving time in South Australia. Saturn and Venus are drawing apart, Mercury is just on the horizon. The thin crescent Moon is between Venus and Mercury. Similar views will be seen elsewhere at the equivalent local time (click to embiggen).

Bright white Venus is now quite low above the eastern horizon,  and hard to see from cluttered horizons. Venus looks like a waxing Moon when seen through even a small telescope. Venus is in the constellation of Virgo.

Saturn is now visible above the eastern horizon before dawn. Saturn climbs higher in the morning sky and moves away from Venus during the week.

Mercury returns to the morning sky, but is difficult to see in the twilight below Venus. You will need a flat, unobscured horizon (like the ocean) to see it. 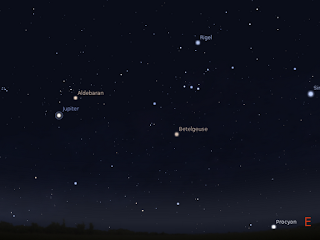 Evening sky looking East as seen from Adelaide at 22:00 pm local daylight time on Saturday December 8. Similar views will be seen elsewhere at the equivalent local time.  Click to embiggen.

Mars will be in binocular range of M22, one of the finest globular clusters in the sky, for most of the week.

Jupiter is visible all night long now, with opposition just passed on the 3rd. Jupiter is below the Hyades, near the red star Aldebaran. Jupiter moves slowly towards Aldebaran during the week, making it look as if the Bull has two eyes.

Jupiter is easily seen in the late evening sky, rising around 8:00 pm local daylight saving time and is high by midnight. Now is a perfect time to observe Jupiter with a telescope of any size in the evening. Jupiters' Moons are easily seen in binoculars, and can be followed from night to night changing position. 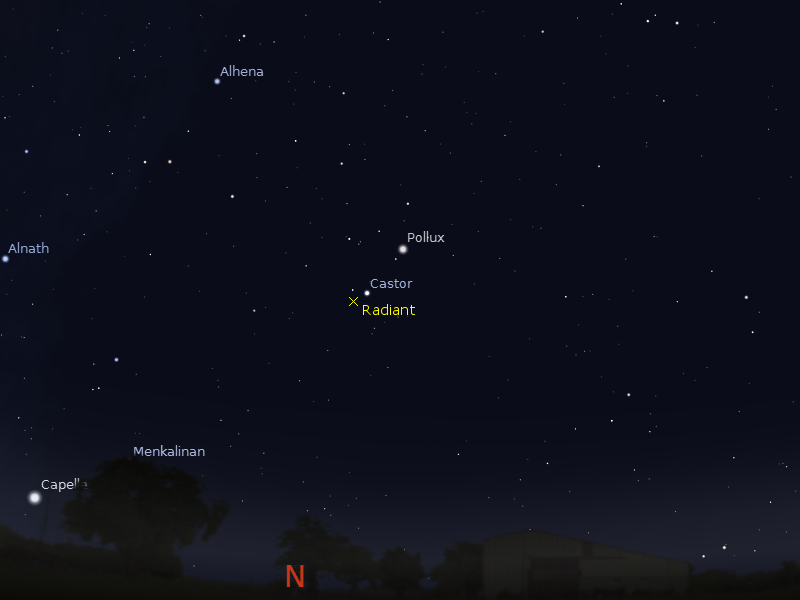 With the Moon out of the picture in Australia we should see roughly a meteor every 2 minutes.