First Quarter Moon is Thursday December 20. Mars is lost in the twilight. Earth is at solstice on the 21st. Jupiter is prominent in the late evening sky and is visited by the Moon on the 25th and 26th. In the morning skies Venus is low on the horizon and close to Antares on the 25th. Saturn is visible low in the morning sky not far from Venus. 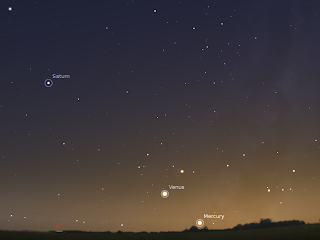 Morning sky on Tuesday December 25 looking east as seen from Adelaide at 5:15 am local daylight saving time in South Australia. Saturn and Venus are drawing apart, Mercury is just on the horizon. Venus is near the star Antares. Similar views will be seen elsewhere at the equivalent local time (click to embiggen).


Bright white Venus is now quite low above the eastern horizon,  and hard to see from cluttered horizons. Venus looks like a waxing Moon when seen through even a small telescope. Venus is in the constellation of Scorpio.It moves through the head of the Scorpion (although this will be difficult to see in the twilight) and is close to the red star Antares on the 25th.

Saturn is now readily visible above the eastern horizon before dawn. Saturn climbs higher in the morning sky, becoming easier to see in the twilight,  and moves away from Venus during the week.

Mercury  is low in the morning sky, but is very difficult to see in the twilight below Venus. You will need a flat, obscured horizon (like the ocean) to see it. 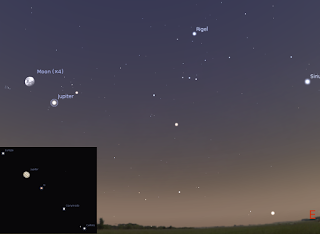 Evening sky looking East as seen from Adelaide at 21:00 pm local daylight time on Tuesday December 25. The nearly Full Moon is close to Jupiter. The inset shows Jupiter's Moons at this time. Similar views will be seen elsewhere at the equivalent local time.  Click to embiggen.

Mars is lost in the twilight by the end of the week, and will return in the morning skies next year.


Jupiter is visible all night long now. Despite opposition having just passed on the 3rd Jupiter is prominent in the north-eastern early evening sky, being quite visible in the twilight. Jupiter is below the Hyades, near the red star Aldebaran. Jupiter remains near Aldebaran during the week, making it look as if the Bull has two eyes.

Jupiter is easily seen in the late evening sky, rising around 6:30 pm local daylight saving time and is highest in the north by 11:30 pm. Now is a perfect time to observe Jupiter with a telescope of any size in the evening. Jupiters' Moons are easily seen in binoculars, and can be followed from night to night changing position.

The nearly full Moon visits Jupiter on the 25th and 26th.