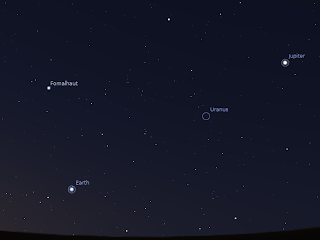 Earth as seen from Mars looking north-west in the late twilight of November 8, 2011 as visualised in Stellarium. The location is approximately the same latitude on Mars as Adelaide is on Earth.

For Some reason one of the top search terms for people visiting my blog, now that Elenin has gone, is "Earth from Mars". So, here it is for you searchers.

Comments:
Ian, people searching for "Earth from Mars" could have something to do with the "John Carter" movie trailer, where, at the end of the trailer, there is are a few seconds of John Carter looking at the very exaggerated (and gorgeous) earth and moon from Mars.

Hi Ian,
The Anonymous is absolutely right. I just saw the trailer of "John Carter" and I thought "Gee that was amazing, it never crossed my mind before, that on the Martian sky would be possible to see the Earth and the Moon as planets, not as just remote "star-like" objects, because the Earth is a lot larger than Mars. But then, the Moon wouldn't be that much bigger looking as it was on the movie, would it?

Asteroid 2005 YU55 will Not Hit the Earth (but you...
Mercury and Venus in the Head of the Scorpion
Carnival of Space #221 is here.
Southern Skywatch November 2011 Edition Up
The Sky This Week - Thursday November 3 to Thursda...
When bottle rockets go wrong
Alternative Medicine in the Adelaide Advertiser
When an Eminent Historian Writes on the History of...
Opposition of Jupiter, October 2011
The Scale of the Solar System by Car