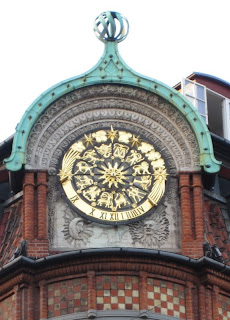 Sundial found down some random street in Copenhagen. You really need to click to embiggen to see its full glory.

Well, I'm back from WorldPharma 2010 in Copenhagen. As well of lots of interesting science (nuclear receptors can modulate Apolipoprotein expression and increase the rate of removal of amyloid form the brain, could be a treatment form Alzheimer's disease if it didn't cause fatty liver) but not so much astronomy.

Partly because it was often cloudy at night and partly because, of course, it was summer, and at Copenhagen latitude the Sun didn't set till around 9:30 or so, and it was still light at 11. When I got up at 5:00, it was also fully light. So I didn't see much in the sky.

But there was lots of astronomy related stuff around. This sundial we found wandering around in random streets somewhere between Rosenberg Slot and the Rundturm (more about the Rundturm later). Copenhagen is a bit like that, turn some random corner and something amazing pops up.

Anyway, we were actually looking at some amazing ivy covered buildings (and how the heck to get back to the metro) when we stumbled on this. At first we didn't know what to make of it. Was it a wall decoration? Was it a clock? The golden zodiac was pretty, but didn't seem to be related to anything. We first formed the hypothesis that it was a artistic clock and the comets moved to cover and uncover numbers, but that seemed silly. We came back later to see that the comets hadn't moved, and it was then that I spotted the gnommon.

Yep, it was a sundial.

I was confused by the numbers running from just 9 t0 4 (in the afternoon presumably), but other sundials have similar abbreviated faces, must have to do with when the sundial is exposed to the sun. I can't find it listed in any of the hertiage information in Copenhagen, maybe they just see it as being ordinary.

Comments:
Sundials are so cool. love that one. Hope to be able to see it in person someday