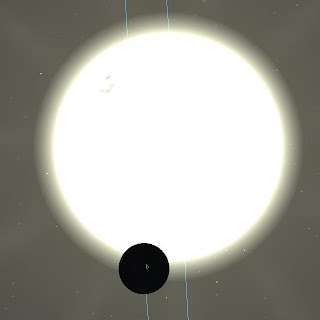 WASP-18b as visualized in Celestia.

When first discovered, "Hot Jupiters", giant exoplanets that orbited their stars more closely than Mercury orbits the Sun, were a source of amazement. 373 planets and 149 Hot Jupiters later close orbiting planets are a bit ho-hum.

Not so WASP-18b. Discovered by the Wide Angle Search for Planets, this amazing planet screams around its sun, HD 10069, in just under an Earth day. From WASP-18b's surface HD 10069 would occupy 30% of its sky (if you could see the sky from its surface). At over 7 times more dense than Jupiter, it probably has a large rocky core.

But it is so massive, and so close to its sun that WASP-18b that it should raise a tidal bulge on its sun, which should slow the planet down and make it spiral into its sun.

And there's the rub. WASP-18b should come close enough to HD 10069 to be torn apart in around 650,000 years. The likelihood that we would come across a planet so close to its death dive is quite remote, either we have been extraordinarily lucky in coming across WASP-18b, or there is something wrong with our theories of tidal dissipation in extrasolar systems. Either way, WASP-18b is a planet that will keep astronomers talking for some time.

Other discussions of WASP-18b at Sky and Telescope and ScienceNow!

This explains the cause of the WASP-18b mystery and all the probes anomalies as well.

Those orbital elements are incorrect, because Celestia's default reference frame is the ecliptic plane, while planetary orbits are given in the sky-plane frame.

You therefore need to convert the orbital elements to the ecliptic frame. I had a spreadsheet to do this but I seem to have deleted it, which is silly of me.

New calculations shows that WASP-18b probably not will be stable in its present orbit, but will be thrown away with from the star, with a velocity 3 times higher than the velocity astronomers today believe it “should” approach the star.

This certainly will be a big chock, and something we should be able to confirm within 1 to 2 years.

The idea that also planets are affected of the same accelerating force that space probes (by fly by) support this new theory and make it also possible to understand the cause of the 4 following mysteries:

1.)Why gas-planets can be found very closed to starts ( with their atmosphere intact)
2.)Why huge planets can be found more as 15 billion km. from their mother stars.
3.)How Jupiter’s was created (longer away from the Sun) and what brought it closer to the Sun.
4.)How water come to earth.

UPDATE
The conclusion in my previous post was wrong.
It’s not enough only to consider the possible force that can be pass by, - based on the angel velocity as a result of a astronomic bodies rotation (centrifugal force) affecting the planet (WASP-18b).

It’s also necessary calculating the possible energy requirement and compare that to the (rotation) energy available due to the stars rotation..
This shows that even though if enough energy fast “could” be transmitted to Wasp-18b, it’s simply not available.
Wasp-18b will therefore approach the star, and will not only be affected by the tidal effect (expected 2.8 s. per year) but will probably also be effected by too weak rotation energy (+ 2 s per year) Total 4.8 s. per year.

However Wasp-18b should have been dismissed for several hundred million years ago. How could it “hide it self” from the tidal force so long time?
The answer seems to be “written in the stars”.
By comparing with other solar systems we can easy understand the logic. (The site is now updated and much better now) >

Sorry for the confusion…

Super Jupiter Goodness
Just Another Friday Night in Adelaide...
Nibiru it is Not.
The Sky This Week - Thursday August 27 to Thursday...
Big Aussie Starthunt Extended.
Pluto and Science Literacy
Carnival of Space #117 is here.
And Now the Morning Sky from Mars
And As Saturn Slowly Sinks in the West
Another Carnival