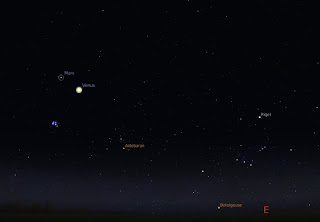 The Eastern Horizon as seen from Australia at 6:00 am local time, click to embiggen.

The Full Moon is Tuesday July 7. On Saturday July 4 the Moon is very close to the bright red star Antares.

Saturn is visible in the early evening and can be easily seen as the second brightest object above the north-eastern horizon. It is about a quarter of the way between the bright stars Regulus and Spica.

Jupiter can be seen just above the eastern horizon before 10 pm local time but it is still best seen in the morning with the other bright planets, Venus and Mars.

Mars and Venus are close together, and in a very beautiful region of the Morning sky, Near the Pleaides, Hyades and the Constellation Orion (see Chart). Mars and Venus continue to draw apart during the week. Mercury is now lost to view, and will reappear in the evening later this month.

If you are an early morning riser with a small telescope, Jupiter's Moons are readily visible (also in binoculars) and Venus is in 'waxing Moon" Phase.