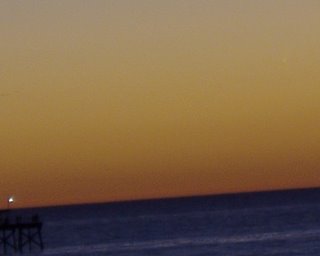 I saw it! I saw it! And it was fantastic. The image to your left is my best attempt at a photo as we watched in the twilight (its the faint dot near the top righthand corner of the image, click to enlarge). Instead of searching for the comet in daylight, I should have been buying film for the SLR camera.

But it was worth hunting around in the sky for McNaught during daytime. It was a bit serendipitous, I was actually looking in the wrong spot, and had my eye drawn to the comet by a passing bit of fluff. And there it was! I was lucky, the comet was next to a cornice, which blocked out the Sun and pointed directly at the comet. I was able to see it reasonably clearly, as a faintish dot with a short tail, when I had my eye in. I was able to relocate it, then rushed upstairs, dragged the Iron Chef downstairs and showed it to him, and he was able to see it clearly (ahhh, to have young eyes again). But to see a comet in daylight (1:24 pm), was amazing, no matter how dim.

So when I got home we had visitors, after the obligatory swim and communal dinner, I chivvied them off to our local Adelaide beach to look for the comet. I had zero resistance, as they had heard of the comet and wanted to see it. We got there about 15 minutes after sunset. I pointed out Venus, then started describing how to look for the comet when it got a bit darker, as I was finishing my description, there were excited cries of "I see it! I see it!" Confused, it turned to the sky, and there it was, absolutely clear. "Bloody Hell!" I said. It was fantastic. There was a fair bit of haze, ironically, after the very clear night last night, but the comet and a short tail (maybe a fingerwidth long) was very visible. It's hard to say how bright it was, I think it was about Venus brightness, but because it was deep in the haze, and low to the horizon, it looked dimmer than Venus off to the right. It beats the heck out of Halley, but sadly, the photo does not do it justice, as I couldn't control the exposure.

We watched it excitedly, passing the binoculars around, various friends and neighbours, and the odd stranger, wandered up, and asked what we were doing. So we pointed out the comet and gave them the binoculars as well. There were various exclamations of delight. A bloke who was actually after the comet came up as well, and we pointed it out. A footpath astronomy festival.

There was a festive air at the scene, the deep colours of the sky, the bright slash of the comet coloured orange by the haze, Venus gleaming above, the warm air blowing of the sea with a tang of salt.

A magical night. It will be great to follow the comet over the next few nights. It will be dimmer, but it will be higher in the sky, and easier to see. I better get some film for the SLR though, so I can do longer exposures. I'll try again to see McNaught in the daylight, I've marked my viewing spot, so I can go back to it.

Now I hope I'm able to get up early Tuesday morning to see Mars amongst the Nebula.

Comments:
please take a look at the image some Aussie Astronomers are getting. Look here http://www.iceinspace.com.au/forum/showthread.php?p=183183#post183183