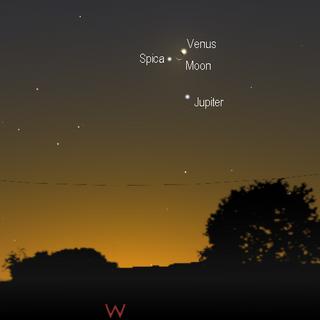 I've been busy with beginning of Semester stuff and a few deadlines, so the blog has been quiet. But thanks to Stuart I've been introduced to a new toy. It's a photorealistic planetarium program called Stellarium. A screen shot is reproduced here. It is gorgeous, it is wonderful it gives wonderful sky views and best of all it is FREE!!!

But, and there always is a but isn't there, it is painfully S L O O O W. It is glacial. This is probably due to all the photorealistc rendering they do. My favorite CPU hog, the 3D spaceflight simulator Celestia (run, don't walk, to this site NOW) is positively zippy by comparison. When these guys say you need a fast CPU, they are not kidding. Even setting the time in the program is a series of painful waits (it is almost, but not quite, worth the effort to set up scripts to turn Celestia into a planetarium program).

So I won't be giving up SkyMap any time soon, if you want a free Sky Charting program for astronomical observation, then try Cartes du Ciel. But if I want to impress visitors with demonstrations of the sky, or generate photorealistic horizons for my web page, then Stellarium is it.

I've noticed quite a large difference in performance between different PCs. One laptop I've used (great for taking outside at night) can cope very well with it while another runs a bit slower. I know someone with a desktop PC that finds it extremely slow.

I think it is probably related to the graphics card. I think Stellarium uses OpenGL to render the sky. If your graphics card supports OpenGL it will take the brunt of the work and things should be smooth. If it doesn't, your computer's CPU is left with the hard work - bringing the system to a crawl.

Yeah, Stellarium is great fun. I think it maybe a computer thing rather than a graphic thing per-se. The card does support OpenGL,Celestia flat our refuses to run if OpenGL is not present. So it's probaly someinternal quirk that glues everything up. I have to run Stellarium twicxe to get it to run, which suggests an internal quirk.

I also got Stellarium (thanks Stuart) and I like it very much. Runs fine on the laptop.

Runs fine on the laptop

I hate you. Have you tried out Celestia?

Perhaps the southern sky is just harder to render what with the LMC and SMC and all ;-)

Not just the Magellanic clouds which Stellarium does well BTW, but a lot of territory is taken up by chunks of the Milky Way you folks nevere see, or never see much above the horizon.

Venus and Regulus
Happy Anniversary
Why I like Astronomy
Mars and the Pleiades
Mercury, Venus and Jupiter
The view from Tatooine
Or maybe not
A forgotten gem
Happy Campers
Bomb blasts rock London