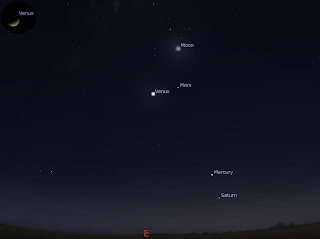 Mars, Venus, crescent Moon,  Mercury and Saturn on 27 February 2022 at 06:04 ACDST, (90 Minutes before sunrise) as seen from Adelaide. Most of Australia will enjoy similar views 90 Minutes before sunrise. Click to embiggen.
The February edition of Southern Skywatch is now up. After the planetary shenanigans of last year Jupiter is the sole bright planet in the evening sky and is lost to view early in the month. The main action is now in the morning skies with four bright planets, Venus, Mars and Mercury (and then Saturn) form nice patterns.

Mercury  is in the morning sky, and is readily visible in the eastern morning twilight from about the second week on, about an hour before sunrise. This is the best time this year to see Mercury in the morning sky. Mercury is below the pair of Venus and Mars, forming a nice triangle for most of the month. Mercury is at its furthest from the Sun on the 17th, and then sinks towards the horizon, later in the month in on the rising Saturn and by the end of the Month it is a hand-span above Saturn. On the 27th and then the 28th the sight of the pair of Venus and Mars, the thin crescent Moon, Mercury, and Saturn in the eastern sky an hour before sunrise will be impressive.

Venus starts the month in the eastern morning twilight and is readily visible an hour before sunrise below Mars. Venus and Mars form a pair which slowly come closer over the Month. Mars slowly brightens but is outshone by brilliant Venus.
Venus is a thin crescent in telescopes at the beginning of the month and will wax as the month progresses. Venus will be at its greatest brilliance on the 13th, when its appearance is like that of the first quarter moon.

Mars starts February in the lid of the “teapot of Sagittarius”, Mars makes an attractive triangle with Venus and Mercury for most of the month, and is readily visible an hour before sunrise, above bright Venus.
On the 2nd Mars is close to the globular cluster M28 (1 degree) and on the 6th close (0.3 deg) to the globular cluster M22. And don’t forget, on the 27th and then the 28th the sight of the pair of Venus and Mars, the thin crescent Moon, Mercury, and Saturn in the eastern sky an hour before sunrise will be impressive.

Saturn returns to the morning sky late in February, rising to meet Mercury.