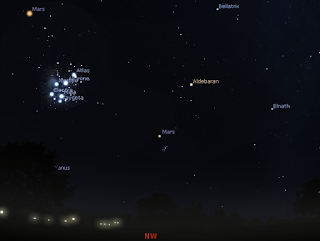 Evening sky at 21:16 ACDST  (90 minutes after sunset), on Thursday, March 4 facing north-west as seen from Adelaide. Mars is the brightest object low above the north-western horizon, Mars is at its closest to the Pleiades cluster. The inset shows the approximate binocular view of Mars and the Pleiades
Similar views will be seen elsewhere in Australia at the equivalent local time (90 minutes after sunset), click to embiggen.

In March most of the planetary action is in the morning twilight.

Mercury is easy to see in the morning this month. It is very close to Jupiter on the 5th and on the 10th forms a triangle with the crescent Moon and Jupiter.

Venus is too close to the sun to see. It will return to the evening sky in May.

Mars is within binocular distance of the Pleiades cluster from the 1st to the 9th and is closest on the 4th. Mars is close to the Moon on the 19th.

Jupiter is rising higher in the morning sky, in a line with Saturn and Mercury. On the 5th it is very close to Mercury and on the 10th forms a triangle with the crescent Moon and Mercury.

Saturn climbs higher in the morning sky and is close to the crescent Moon on the 10th.