The First Quarter Moon is Wednesday, August 26. Four bright planets are visible in the very early morning skies. Venus is below the arm of Orion. Mars is rising before midnight. Jupiter and Saturn dominate the evening sky but Jupiter now sets before morning twilight.
The First Quarter Moon is Wednesday, August 26. The Moon is at Perigee, when it is closest to the Earth on the 21st. 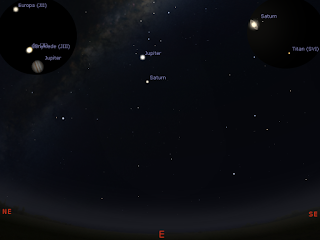 Evening sky at 19:13 ACST (90 minutes after sunset) on Saturday, August 22 facing east as seen from Adelaide. Jupiter and Saturn are high above the Eastern horizon.

The insets show the telescopic view of the planets at the same magnification at this time.


Similar views will be seen elsewhere in Australia at the equivalent local time (90 minutes after sunset), click to embiggen. 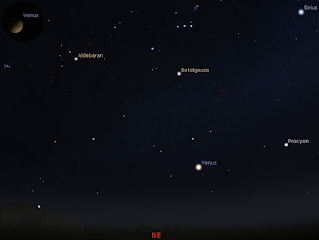 Morning sky on Saturday, August 22 showing the north-eastern sky as seen from Adelaide at 5:25 am ACST (90 minutes before sunrise). Venus is below the arm of Orion.

The inset in the telescopic view of Venus at this time

Similar views will be seen elsewhere in Australia at the equivalent local time (90 minutes before sunrise), click to embiggen. 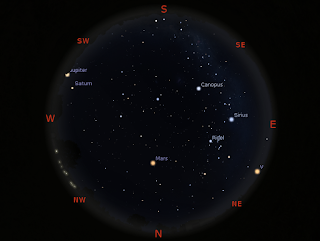 Morning sky on Sunday, August 16 showing the whole sky as seen from Adelaide at 4:25 am ACST.

Similar views will be seen elsewhere at the equivalent local time. click to embiggen.

Four bright planets grace the early morning sky, this will be the last week to see them as soon Jupiter will set before Venus rises.

Pluto Neptune and Uranus are also part of this line-up, but unable to be seen with the unaided eye.

Mercury is lost in the morning twilight.

Venus is below the arm of Orion.

Mars is visible high in the morning sky to the north, east of Jupiter and Saturn. It enters the evening sky shortly before midnight but is still low to the horizon.
Jupiter can be readily seen in the early evening sky. Jupiter and Saturn stay around a hand-span apart during the week and the pair dominate the evening skies. Jupiter was at opposition, when it was biggest and brightest as seen from Earth, on July the 14th, but is still an excellent sight.

Saturn is too is now visible in the early evening skies. Saturn was at opposition, when it was biggest and brightest as seen from Earth, on July the 21st, but is still an excellent sight.