The Last Quarter Moon is Saturday June 13.the Moon is at apogee, when it is furthest from the Earth, on the 15th. 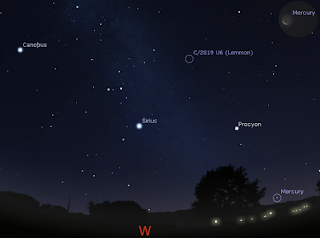 Evening nautical twilight at 18:10 ACST on Saturday, June 13 (60 minutes after sunset) looking west as seen from Adelaide. Mercury is reasonably bright low above the horizon. Comet C/2016 U6 can be see in binoculars above Sirius. For comet spotters charts see here.

The inset shows the telescopic view of Mercury at this time. 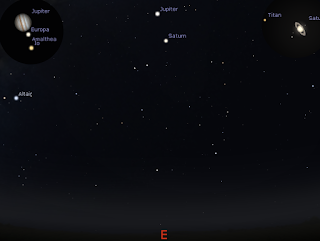 Evening sky at 23:00 ACST on Saturday, June 13 facing east as seen from Adelaide. Jupiter and Saturn are rising above the Eastern horizon.

The insets shows the telescopic views of Jupiter and Saturn at the same scale at 23:00 ACST.


Similar views will bee seen elsewhere in Australia at the equivalent local time, click to embiggen. 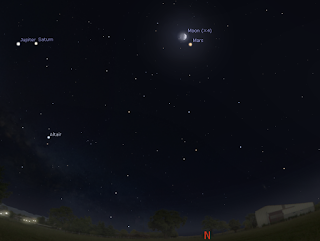 Morning sky on Saturday, June 13 showing the northern sky as seen from Adelaide at 5:50 am ACST (90 minutes before sunrise). Mars and the last quarter Moon are close. 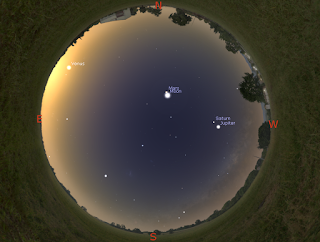 Morning sky on Saturday, June 13 showing the whole sky as seen from Adelaide at 6:55 am ACST (30 minutes before sunrise).

Mercury is high in the evening sky in the twilight this week, and is now visible up to 60 minutes after sunset.


Venus  returns to the morning skies low in the twilight.

Mars is visible high in the morning sky to the north, east of Jupiter and Saturn. Mars is close to the Moon on the 13th.

Comments:
Thanks Ian, I also like seeing interviews with you in the web news re: your day job !

So what was the meteor that Ch Nine conflated with the asteroid? Telling us we could see SN2002nn4 from 5 million km as a meteor train in the atmosphere?

Ta! I have no idea where channel 9 gets it's nonsense from. Did they get confused with a starlink pass or what?