The full Moon is Thursday May 7. Venus is prominent in the evening sky after twilight heading towards Beta Tauri (Elnath) and is closest on the 11th. Three bright planets are visible in the morning skies. Jupiter dominates the morning skies near Saturn and the pair are above Mars. Jupiter and Saturn are now rising before midnight, on the 12th The waning Moon from a triangle with the pair. Eta Aquariid Meteor shower (mornings May 7-8) and comet C/2020 SWAN visible.

The full Moon is Thursday May 7. 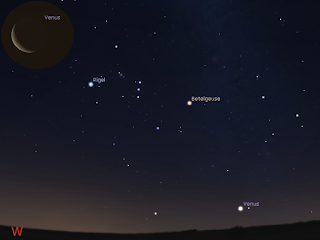 Evening sky at 18:21 ACST on Monday, May 11 (60 minutes after sunset) looking west as seen from Adelaide. Venus is prominent low in the sky and is at its closest to Beta Tauri (Elnath). The inset shows the telescope view of Venus. 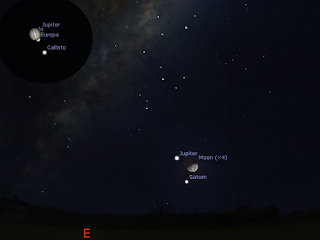 Evening sky at 23:00 ACST on Tuesday, May 12 facing east as seen from Adelaide.The trio of Jupiter, the waning Moon and Saturn are rising above the Eastern horizon.

Similar views will bee seen elsewhere in Australia at the equivalent local time, click to embiggen..

The inset show Jupiter at 23:30 ACST as Europa appears from Behind Jupiter. 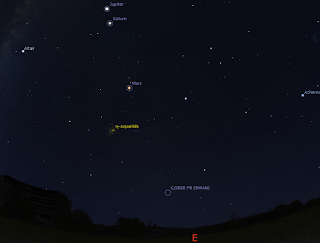 Morning sky on Thursday, May 7 looking north-east as seen from Adelaide at 5:00 am ACST showing the eta Aquariid meteor shower radiant as a star burst. Comet C/2020 F8 SWAN may be visible to the unaided eye below it.

Similar views will be seen elsewhere at the equivalent local time,  click to embiggen.

The eta Aquarid meteor shower peaks on the late evening/early morning of  6-7 May in Australia,
You should see a meteor every four minutes or so  under dark skies. Details and observing hints are here.

Comet C/2020 F8 SWAN is brighter than expected and is (just) and unaided eye object.  Details and observing hints are here.


Venus is prominent low above the western horizon in the early evening sky. Venus is seen up to 90 minutes after sunset. Venus is  closing in on the bright star Elnath (Beta Tauri) and is closest on the 11th.

Jupiter climbs higher in the morning sky and now can be seen in the late evening sky. Jupiter and Saturn stay around a hand-span apart during the week. On the 12th Jupiter the waning Moon and Satun form a triangle