The New Moon is Saturday May 23. Venus is sinking lower in the evening twilight becoming harder to see as Mercury rises out of the twilight. On the 22nd Mercury and Venus are closest and on May 24 The thin crescent Moon, Mercury and Venus make an attractive, if difficult to see, triangle low in the twilight. Three bright planets are visible in the morning skies. Jupiter dominates the morning skies near Saturn and the pair are above Mars. Jupiter and Saturn are now rising before midnight and visible in the late evening.

The New Moon is Saturday May 23. 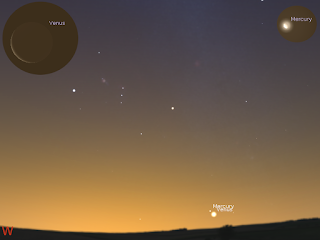 Evening twilight at 17:44 ACST on Friday, May 22 (30 minutes after sunset) looking west as seen from Adelaide. Venus is prominent low in the twilight and at its closest to Mercury (you may need binoculars to see Mercury). The inset shows the telescopic view of Venus and Mercury. 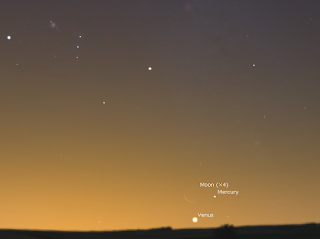 Evening twilight at 17:43 ACST on Sunday, May 24 (30 minutes after sunset) looking west as seen from Adelaide. Venus forms a triangle with the thin crescent Moon and  Mercury.You will need binoculars too see then at their best. The sight of the crescent Moon and crescent Venus together will be interesting. 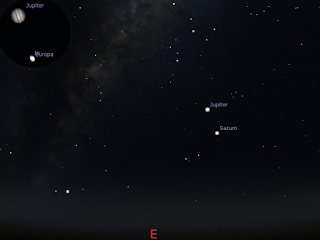 Evening sky at 23:00 ACST on Saturday, May 23 facing east as seen from Adelaide. Jupiter and Saturn are rising above the Eastern horizon. 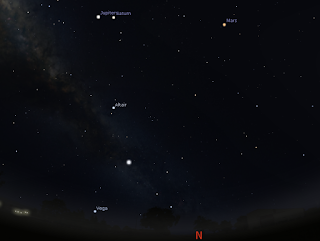 Morning sky on Saturday, May 23 looking north as seen from Adelaide at 5:40 am ACST (90 minutes before sunrise).

Venus is still prominent in the twilight low above the western horizon but is rapidly heading towards the horizon and will soon disappear. Venus is seen up to 60 minutes after sunset at the beginning of the week.Venus, the thin crescent Moon and Mercury form a triangle low in the twilight on Sunday the 24th. Binoculars may be needed to see them at their best.

Mercury climbs higher in the evening sky in the twilight this week, and is closest to Venus on the Friday the 22nd.

Saturn climbs higher in the morning sky below Jupiter drawing away from Mars. It too is now visible in the late evening skies.