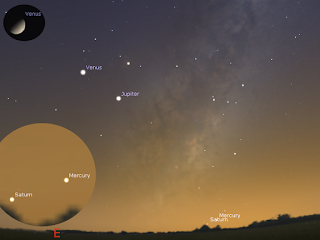 Morning twilight sky on Monday, January 14 looking east as seen from Adelaide at 5:40 ACDST (40 minutes before sunrise). Venus is bright and is coming close to Jupiter. Mercury and Saturn are close low to the horizon. The left upper insert inset shows the telescopic view of Venus at this time. the lower insert shows the approximate view of Mercury and Saturn at this time. 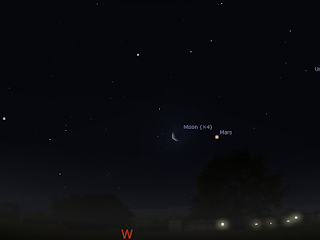 Evening sky on  Saturday, January 12 as seen looking west from Adelaide at 22:15 ACDST (90 minutes after sunset). Mars is the brightest object above the western horizon and is close to the near First Quarter Moon. 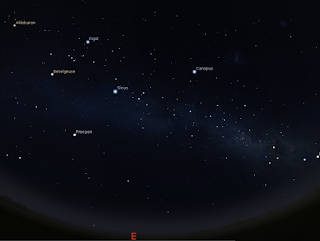 Evening sky on  Saturday, January 12 as seen looking South-east from Adelaide at 22:15 ACDST (90 minutes after sunset).

During the holidays many people will be away from the city lights. This is a perfect time to observe our wonderful southern sky. The Moon is a waxing crescent so this is still an excellent time to look at the wonderful clusters and nebula of our southern skies with the unaided eye or binoculars.

The Milky way stretches from the Southern cross in the south to the distinctive constellation of Orion and beyond. The Milky ways' satellite dwarf galaxies, the Magellanic clouds, (between and below the bright stars Canopus and Achernar) are easily seen away from the city lights. This is the last week to get a good look at these wonders before the Moons light washes them out. 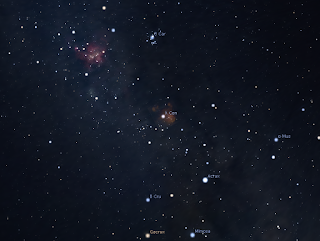 Approximate Binocular view of the area between the Southern Cross and the False cross Saturday, January 12 as seen l at 22:15 ACDST (90 minutes after sunset). The distinctive open cluster, the Southern Pleiades, is seen around theta (θ) Carina (near top center).


Venus climbs higher in the morning skies and Jupiter is heading towards it.

Mercury  is low in the morning twilight and is near Saturn on the 14th. You will need a level unobstructed horizon to see them and may need binouclars to pick them u in the twilight glow. This is the least week Mercury is visible before disappearing in the twilight

Jupiter  climbs higher in the morning sky heading towards Venus.

Mars is in Pisces and is readily seen as the brightest object in the western evening sky. Mars sets after midnight and is close to the waxing Moon on the 12th and 13th.

Saturn is returns to the morning sky low to the twilight and is close to Mercury on the 14th.