Here are my images from the perigee ("super") Moon of 21 January. The images above are taken with my mile phone camera held to a 25mm eyepiece of my 4$" Newtonian  telescope using a mobile phone adaptor, the left image is unadjusted and un-cropped, the right image is 2xZoom at the same scale (unadjusted and un-cropped). If you click on them for the full size image, you can see that Zooming didn't really help, bigger image but less clarity. The weird colour of the zoomed moon is due to camera colour response.


Same images cropped to the Moon at a 1:33 ratio then saved as 800x600. Again the Zoomed image has no obvious benefits in clarity. 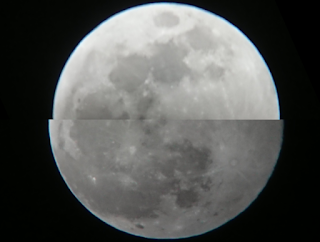 Comparison of the 21 January perigee "super" Moon (bottom) with the apogee "Mini Moon" on the night of Total Lunar Eclipse of 28 July, 4:25 am. Sony Xepria 1/2000th sec exposure ASA 400. Note the small but clear difference in size between the two (same image scale and zoom factor).

The difference is not as big as  the perigee apogee pair from 2014. This is because the January perigee moon was about 14 hours form perigee and the apogee Moon was also 14 hours from apogee (when the Moons size will be biggest and smallest respectively). In 2014 the perigee Moon was dead on Perigee and the apogee Moon was 2 hours off apogee, so the size difference was maximized. This year Feb 19 will be 6 hours from Perigee and Sep 13 will be 15 hours from apogee, giving a somewhat better contrast but still not as good as 2014. The year (Feb/Sep) is the best pairing until 2032.

Images through my 10 mm eye piece, I can't fit the full Moon into the active area of the camera, but I can get some nice details suitable for mosaics. I'll post some later on. I'll alos have a go with the 8" with motor drive when I feel like lugging the behemoth out.