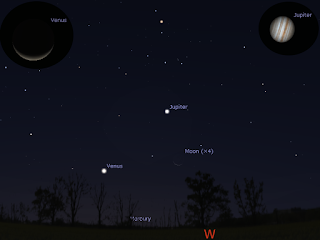 Evening twilight sky on Thursday October 11 looking west as seen from Adelaide at 20:22 ACDST (60 minutes after sunset). Venus is above the horizon, not far from the crescent Moon and below Jupiter.

The insets shows  simulated telescopic views of Venus and Jupiter as seen with a 5mm telescopic eyepiece on Thursday October 11. Venus is a clear crescent in small telescopes.

This month has  5  bright planets in the evening sky for the first half of the month as Mercury returns to the evening sky. In the latter half birilliant Venus is lost to view in the twilight. Uranus is at opposition on the 24th and is (just) visible to the unaided eye in dark sky locations.  Venus , Jupiter and Mars are prominent in the early evening sky until mid month when Venus is lost to view. Mars is is rapidly dimming.

Mercury  is prominent in the evening sky this month, meeting Venus on the 16th and Jupiter on the 27th -31st.

Venus is rapidly heading towards the horizon and is  lost in the latter half of the month. It closest to Mercury on the 16th.  In even small telescopes it is a dramatic thin cresent (may also be visible as a crescent in good binoculars).

Mars was at opposition on July the 27th. It is still a reasonable telescopic target but rapidly dims and shrinks over the month. More details at my Mars opposition site. October 18, Moon and Mars close.

Saturn is still within a binocular field of the the Trifid Nebula and Lagoon Nebula this month but is moving closer to M22. October 15 Moon close to Saturn.