The Sky This Week - Thursday July 26 to Thursday August 2

The Full Moon is Saturday, July 28. There is a total lunar eclipse on the morning to the 28th, the longest this century. All 5 bright unaided eye planets can be seen in the evening sky. Venus is high in the early evening sky. Mercury continues to sink towards the horizon in early evening skies. Jupiter is past opposition, but is still big and bright in telescopes. Rapidly brightening Mars and Saturn are visible in the evening skies. Mars is at its brightest and at opposition , the best since 2003, on the 27th. The Moon is close to Mars on the 28th.

The Full Moon is Saturday, July 28. The Moon is at apogee, when it is furthest from the earth, on the 27th. There is a total lunar eclipse on the morning to the 28th, the longest this century. 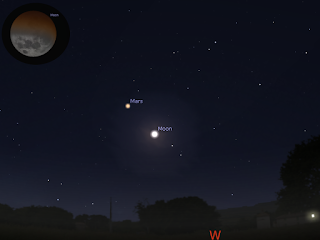 Western horizon as seen from Sydney on  28 July at at 5:15 am AEST. The eclipse is about 15 minutes from totality. The inset shows the telescopic/binocular view at this time. Click to embiggen

On the East coast, the eclipse starts when the sky is quite dark at 4:24 am AEST and Totality is at 5:30 pm AEST, so the Moon will appear to be a burnished copper disk in a dark sky full of stars. Totality occurs as the sky is paling and maximum eclipse occurs at civil twilight, so the Moon may be difficult to see against the brightening sky. As this is quite a dark eclipse of 1.6 depth, it may even end up dark grey or brown.

In the central states the eclipse starts before astronomical twilight at 3:54 am ACST  and Totality begins at 5:00 am ACST when the sky is still fully dark. Central states will also see the eclipsed Moon in all its coppery glory accompanied by red Mars. The colour contrast will be interesting.

More details, timings for major cities, photography and observing hints are at my eclipse page. 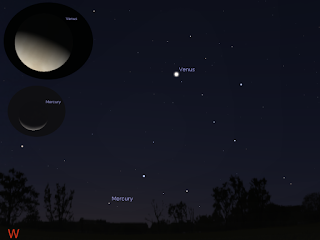 Evening twilight sky on Saturday July 28 looking west as seen from Adelaide at 18:29 ACST (60 minutes after sunset). Venus is above Mercury, ad Mercury is close to the bright star Regulus. The inset shows  simulated telescopic views of Venus and Mercury as seen with a 5mm telescopic eyepiece (compare with Jupiter, Saturn and Mars).

Brilliant Venus is now visible in the evening until well after full dark. Venus is visible to the unaided eye from sunset, easy to see 30-60 minutes after sunset and can viewed well after 90 minutes after sunset. During the week Venus moves towards the bright star Spica. Mercury is visible below Venus near the bright star Regulus. This is the last week to see Mercury in the evening before it returns to the morning skies. 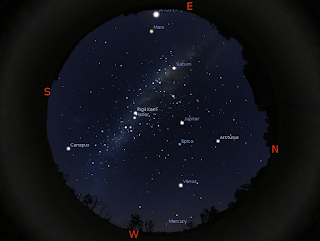 Whole sky view of the evening sky on Saturday July 28 as seen from Adelaide at 18:29 ACST (just after 60 minutes after sunset). all five bright planets are visible in the evening sky.

This will be the last wekk to see all 5 together in the evening sky until Mercury returns in September.

Similar views will be seen throughout Australia at the equivalent local time (just after 60 minutes after sunset, click to embiggen). 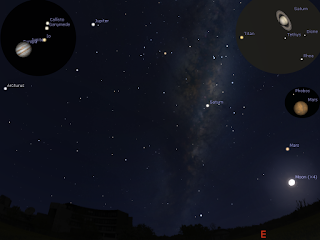 The insets are a simulated telescopic view of Jupiter and its moons at 18:59 ACST, Ganymede has just reapaerd from eclipse and Europa has just entered occultation. Jupiter, Saturn and Mars are shown as seen with a 5mm telescopic eyepiece.

Similar views will be seen throughout Australia 90 minutes after sunset (click to embiggen).


Venus  is  readily visible above the horizon in the early evening.  It is bright enough to be visible from just on sunset and to well past 90 minutes after sunset at full dark, when it is two and a half hand-spans above the horizon. During the week Venus moves towards the bright star Spica.

Mercury sinks lower in the evening skies this week. Mercury is visible below Venus near, Regulus. This is the last week to see Mercury in the evening before it returns to the morning skies.

Jupiter  is high the early evening sky. It was at Opposition on the May 9th, and is still visible most of the night. It is  a good telescopic object in the mid to late evening and is highest around 19:30 local time. There are some good Jovian Moon events this week. This week Jupiter is still close to the bright star alpha Librae (Zubenelgenubi).

Mars is in Capricornius and is now rising in the evening, although best telescopically in the morning. Mars is rapidly brightening ahead of opposition later this month and is now quite bright (although it will get brighter still) and readily recognisable in the late evening. In a telescope you may see a few features as the huge dust storm sweeping the planet subsides. Mars 1s at opposition on the 27th, when it is biggest and brightest as seen from Earth. This is the best opposition since 2003. A guide to observing Mars at the time is at my Mars Opposition page. The Moon is close to Mars on the 28th. During the Lunar eclipse it will be interesting to to contrast ruddy Mars with the copper Moon.

Saturn is climbing higher the evening sky, and is now a good telescopic object in the mid to late evening sky. It was at opposition, when Saturn is biggest and brightest as seen from Earth, on June the 27th. It is within binocular range of several attractive clusters and nebula. It is close to the bright globular cluster M22 and the pair are visible in binoculars and wide field telescope eyepieces.