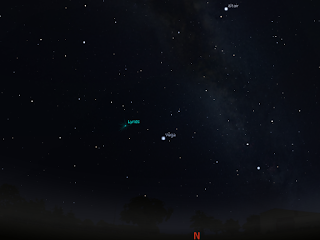 The morning sky looking north as seen from Brisbane at 5:00 am AEST on April 23. The Lyrid radiant is marked with a starburst. It is quite close to the obvious bright star Vega low above the northern horizon.

Similar views will be seen elsewhere at an equivalent local time. The radiant will be higher in northern Australia, and lower in southern Australia (click to embiggen).

The Lyrids, the debris of comet C/1861 G1 (Thatcher) are a weak but reliable shower that occurs every year between April 16- April 25, with the peak this year on April 23 Australian time.

The predicted ZHR this year is 18 meteors per hour. the number of meteors you could expect to see if the radiant (the apparent position where the meteors originate) was at the highest point of the sky, under dark sky conditions. Under ideal conditions, you will see a meteor on average about once every three minutes. This can be as interesting as watching paint dry. Also, while that meteor every three minutes is the average, meteors are like buses, you wait for ages and then a whole bunch turn up. In Australia, the rate is much less.

Under real conditions the Lyrids radiant will not rise to the zenith from most places, and most places won't have really dark skies. The lower the radiant is, the thicker atmosphere will obscure the fainter meteors, and some of the meteors will start to "burn" below the horizon, so over all you will see fewer.

This is particularly true in Australia, where the radiant is very low to the northern horizon. In Australia the radiant rises about 1 am local time, but it is not really high enough for there to be any real chance of seeing meteors until around 4 am, when the radiant is between three hand-spans to four hand-spans above the horizon (see diagram above). The Moon has long set, so Moonlight is not a factor this year. 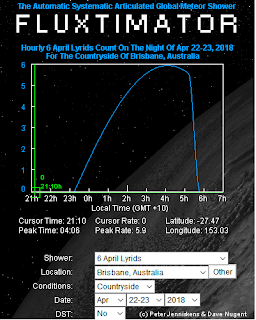 Comments:
Thanks for that info. A friend of mine saw some shooting stars last night which reminded me of this event, but there were very little Australian info on the Net in regards to when, where and which part of the sky to look at.

thanks for the information, much appreciated.