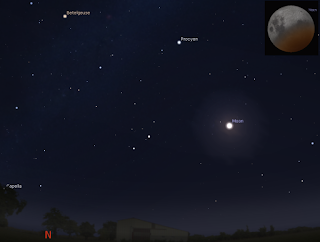 Evening sky as seen on January 31 at 22:30 ACDST, with the total Lunar eclipse well under way on a "Blue" Moon. Similar views will be seen elsewhere in Australia at the equivalent local time. (click to embiggen).

The January edition of Southern Skywatch is  now up.

This month  sees most of the action move in the morning sky. Speedy Mercury  and Saturn return to the morning twilight.

January 31; "Blue" Moon and total Lunar Eclipse. This is the first total lunar eclipse since September 2015, and the best of the two Lunar eclipses this year.