The First Quarter Moon is Thursday, September 28. Jupiter and the bright star Spica are nearby in the late twilight sky. The thin crescent Moon is close to Jupiter on the 22nd. Earth is at spring equinox on the 23rd. Saturn is visible all evening in the heart of the Milky Way and is close to the Moon on the 26th and 27th. Venus is now low in  the morning sky coming close to the bright star Regulus.

Earth is at spring equinox on the 23rd, day and night will be approximately equal in length. The First Quarter Moon is Thursday, September 28. The Moon is at apogee, when it is furthest from the Earth, on the 27th. 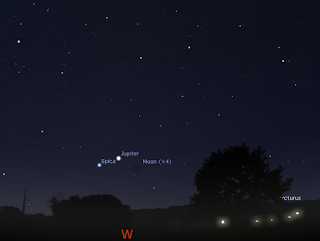 Evening sky on Friday September 22 looking north-west as seen from Adelaide at 19:07 ACST  (60 minutes after sunset). Jupiter is low above the horizon close to the bright star Spica.The Thin crescent Moon froms a triangle with the pair.

Jupiter is setting mid evening and is above the western horizon in the early evening at full dark. It is close to the bright star Spica, the brightest star in the constellation of Virgo. Over the week Jupiter moves away from Spica. The thin crescent Moon is close to Jupiter on the 22nd.

Opposition, when Jupiter is biggest and brightest as seen from Earth, was on April the 8th. Jupiter is rising before the sun sets and sets around 8:30 pm local time. Jupiter is now too low to be a good telescopic target, but the dance of its Moons is visible even in binoculars for a brief time. The following Jupiter events are in AEST. 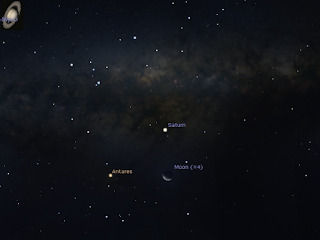 Evening sky on Tuesday September 26 looking west as seen from Adelaide at 19:35 ACST, 90 minutes after sunset.

Saturn was  at opposition on June the 15th, when it was biggest and brightest in the sky as seen from earth. Saturn is visible all evening long. Saturn is a good telescopic target from 7:30 pm until midnight. It is poised above the dark rifts in the Milky Way and is in a good area for binocular hunting. Although still high in the early evening sky, Saturn begins to sink into the western evening skies as the week progresses.  Saturn's rings are visible even in small telescopes and are always good to view. Saturn is close to the Moon on the 26th and 27th. 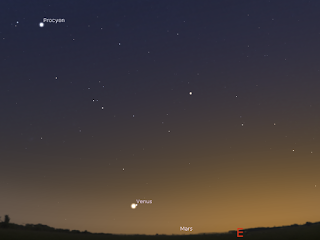 Morning sky on Thursday September 21 looking east as seen from Adelaide at 5:30 ACST (45 minutes before sunrise). Venus is bright just above the horizon and is close to the bright star Regulus.

Similar views will be seen throughout Australia at the equivalent local time (that is 45 minutes before sunrise, click to embiggen).

Venus  is lowering in the morning sky and is visible in telescopes as a "Gibbous Moon". This week Venus comes close to the bright star Regulus. It is becoming hard to see Venus in the early twilight, but it is still brilliant enough to be obvious shortly before sunrise.On the 21st Venus is very close to the star Regulus.

Mars is just emerging from the twilight, but will be difficult to see for some weeks.