The New Moon is Tuesday March 28.The Moon is at perigee, when it is closest to the Earth, on the 30th. 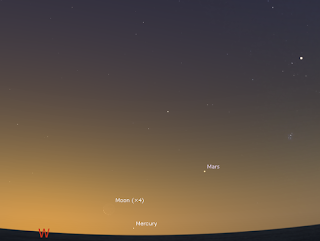 Evening sky on Wednesday March 29 looking west as seen from Adelaide at 19:45 ACDST (35 minutes after sunset). Mercury is low above the horizon and close to the thin crescent Moon.

Similar views will be seen throughout Australia at the equivalent local time (that is 35 minutes after local sunset, click to embiggen).

Venus  is now lost in the twilight.

Mercury returns to the evening twilight, but is difficult to see. On the 29t the tine crescent Moon is close to Mercury, but you will need a clear, unobscured level horizon (like the ocean) to see it. 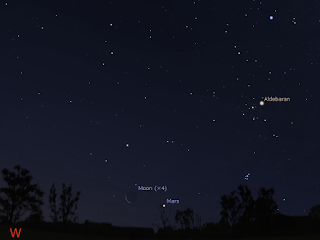 Evening sky on Thursday March 30 looking west as seen from Adelaide at 20:08 ACDST (60 minutes after sunset). Mars is low above the horizon, not far from the thin crescent Moon.

Mars is in the western evening skies in  Pisces. It is is low in the dusk sky, but is the brightest object above the western horizon low in the late twilight. 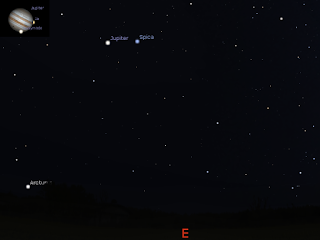 Evening sky on Friday March 24 looking east as seen from Adelaide at 22:50 ACDST.  Jupiter is now well above the horizon close to the bright star Spica. The inset shows the telescopic view of Jupiter at this time with Ganymede and its shadow transiting Jupiter's face, and Io reappearing from occultation. Similar views will be seen elsewhere in Australia at the equivalent local time. (click to embiggen).

Jupiter is rising well before midnight and is now reasonably high above the horizon in the evening this week. It is close to the bright star Spica, the brightest star in the constellation of Virgo.

Jupiter is a good telescopic target from around 11 pm on, and the dance of its Moons is visible even in binoculars. The following Jupiter events are in AEDST. 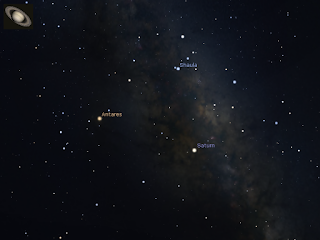 Morning  sky on Saturday March 25 looking north-east as seen from Adelaide at 5:58 ACDST (90 minutes before sunrise). Saturn is high above the horizon.

Saturn rises higher in darker morning skies this week. Saturn is now high enough above north-eastern horizon to see easily and is now a good telescopic target. It continues to climb into darker skies as the week progresses. It is within binocular distance of the Triffid and Lagoon nebula. With the Moon waning this is now an attractive view again..