The Last Quarter Moon is Friday September 23. Earth is at Equinox on the 23rd, when day and night are approximately equal length. 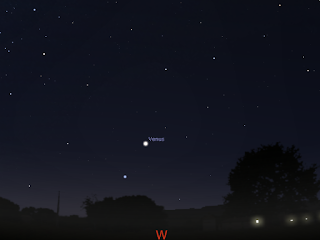 Evening sky on Saturday September 24 looking west an hour after sunset. Venus and Spica are close the horizon, with Venus well above Sica.  Similar views will be seen throughout Australia at the equivalent local time. (click to embiggen).

At the start of  the week Venus is just above the bright star Spica, the brightest star in the constellation of Virgo.  As the week goes by Venus climbs higher into the evening sky away from Spica and towards the head of the Scorpion. 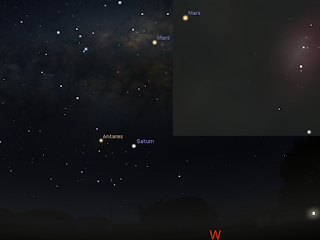 Evening sky on Wednesday September 28 looking west as seen from Adelaide at 22:00 ACST. Mars, Saturn, Antares form a long triangle. The inset shows the approximate binocular view of Mars and the Lagoon Nebula.  Similar views will be seen elsewhere in Australia at the equivalent local time. (click to embiggen).

Mars is in the western evening skies near the body of the Scorpion. On the 22nd it officially enters Sagittarius and comes within binocular range of two glorious nebula, the Lagoon Nebula and the Triffid Nebula. It is also just within binocular range of the Butterfly cluster at this time. With the Moon out of the way watching Mars progress through the star fields of Sagittarius will be delightful.

As the week progresses Mars comes closer to the Lagoon nebula and is closest on the 28th and 29th. People with  wide field telescope lenses will just fit Mars and the Lagoon nebula in them together. at this time. 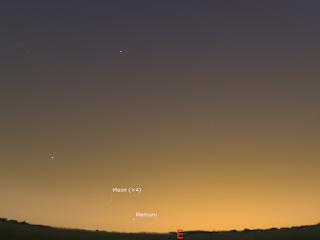 Mercury returns to the morning sky in the last week of September but never rises far above the horizon. On the 29th there is a chance to use the thin crescent Moon as a guide to finding Mercury low in the twilight.

My Images of the Penumbral Lunar Eclipse (Saturday...
Astrophiz Podcast 11 is Out
Penumbral Lunar Eclipse (Morning, Saturday Septemb...
The Sky This Week - Thursday September 15 to Thurs...
Carnival of Space #474 is Here!
The ISS meets Venus and Mars (16-21 September)
Venus Climbs Towards Spica (11 September 2016)
The Lagooon Nebula with a Point and Shoot Camera ...
My Images of Mars close to M19 (7 September 2016)
Astrophiz Podcast 10 is Out