I was so excited by the occultation of Venus that despite setting my alarm for dark o'clock I just couldn't sleep. Popping out from 4 am to check the sky it was clear, and beautiful, perfect for the occultation. Ingress occurred when the Moon was just rising above the horizon, it too a lot of wandering about to find a spot where I could see the Moon (so I missed the ISS flyby), but of course, in all that vas exapnse of clear sky there was but one tiny cloud, and where do you think it was?

Yep, right in front of the Moon where Venus was, I could see the horns of the crescent on either side of the cloud, but where Venus was was completely blocked out.

Setting up for the exit of Venus was less complicated. I had agonised over whether to  use the CCD setup, or the DSLR on Don the 8" Newtonian, or go for portability with the little 4" Newtonian and the Canon IXUS through the lens.  I went with portability and the 4"/IXUS combination.

I was able to set up in my backyard with clear views of the Moon. Got everything set up, Moon in focus, camera aligned. Ran a test shot.

Then the battery ran out!

I rapidly ran inside, grabbed the spare battery disassembled the camera and then reassembled (of course the battery compartment is not accessible when the camera is on the scope) set up the camera AGAIN and was JUST in time to see Venus emerge from behind the Moon.

The images (click to embiggen) are not that flash, and Venus is greatly over exposed, because with the IXUS I cannot manually set it below 1 second exposure, so there is a bit of image trailing (ASA 400). Still I got to see the whole egress, and I looked up from the camera to see Venus exiting from behind the Moon with my unaided eye, which looked awesome as well. I expected it to just "pop" out, but the bright speck grew relatively slowly over a second or so.

So, despite misadventures, a really fantastic experience. 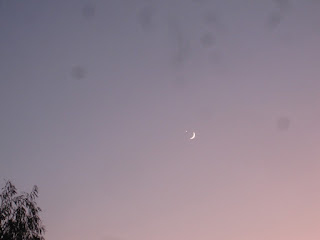 Even now, with the Sun having risen I can see bright Venus next to the Moon, so if you missed the occultation, go look at the Moon, just to the left of the crescent will be a bright dot, Venus. In the Daylight (make sure you block out the sun behind a building or some other big object so you won't damage your eyes by accidentally staring at the sun).