The Sky This Week - Thursday September 24 to Thursday October 1

The Full Moon is Monday September 28. This is a perigee full Moon, where the Moon is closest to the Earth, a so-called "super" Moon. There is a total Lunar eclipse at this time but this is not visible from Australasia. 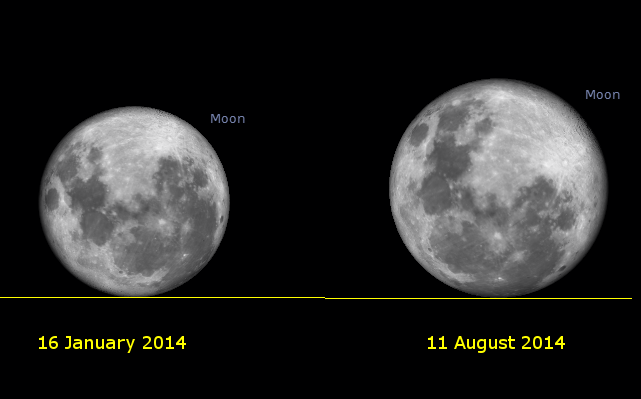 Comparison of the April 21, 2016 mini Moon and the September 21 perigee "Super" Moon simulated in Stellarium.

While a perigee Full Moon is bigger and brighter than the average Full Moon, this is almost imperceptible to the unaided eye (and even with a telescope you will need a good memory or photographic evidence to see the difference). 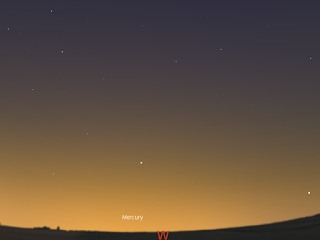 Mercury continues to lower in the evening sky. This is the last week to see it as it heads towards the western horizon. By the weekend it will difficult to see in the twiight, and by the end io the week it is no longer visible 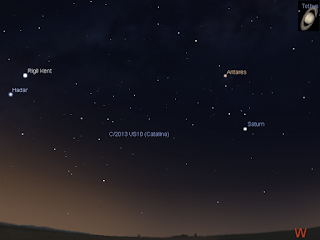 Evening sky on Saturday September 26 looking west as seen from Adelaide at 21:00 ACST.  Saturn is  easily visible high above the western horizon  near the head of the Scorpion. Comet C/2013 US10 is visible in telescopes (and possibly binoculars) not far from the pointers. The inset shows the telescopic view of Saturn at this time. Similar views will be seen elsewhere in Australia at the equivalent local time. (click to embiggen).

Comet C/2013 US10 is not far from the Pointers, near a brightish triangle of stars in Lupus. It is now brightening very slowly. With the full Moon this week it is unlikely to be seen in anything but telescopes.  A black and white spotters map is here. 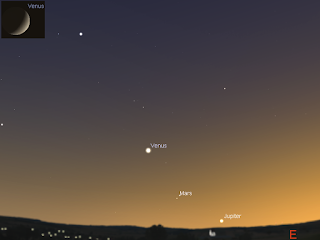 Early morning sky on Friday September 25 looking east as seen from Adelaide at 5:30 ACST showing Venus, Mars and Jupiter just above the horizon, forming a line with Procyon.  The inset shows the telescopic view of Venus at this time. Similar views will be seen elsewhere in Australia at the equivalent local time. (click to embiggen).

Mars remains  low the morning skies this week.  While it is climbing out of the twilight into darker skies it still requires a flat unobstructed horizon to see effectively. From the 24th to 26h it is within a finger-width of the bright star Regulus, being closest on the 25th. This will be difficult to see.

Venus climbs higher in the morning twilight and is now reasonably easy to see. It is a  distinct waxing crescent and impressive in a small telescope. Venus Mars, Jupiter and the bright star Procyon form a line in the sky. While it is currently not very clear, over the next couple of weeks the sight will improve considerably.