The First Quarter Moon is Monday September 21. Earth is at Equinox on the 23rd. This is the last week to easily see Mercury in the evening. Saturn is near the head of the Scorpion and is visited by the Moon on the 19th. Comet C/2013 US10 may be visible in binoculars. Mars is visible low in the morning twilight with Venus easily visible above it in the morning twilight.  Jupiter enters the morning sky

The First Quarter Moon is Monday September 21. Earth is at Equinox, when the day and night are approximately equal in length, on the 23rd. 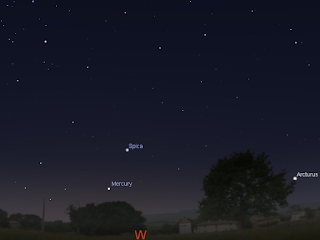 Mercury continues to lower in the evening sky. This is the last week to see it easily visible in the late twilight where it is the brightest object above the western horizon. 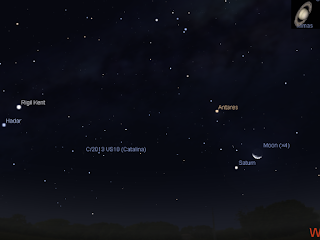 Evening sky on Saturday September 19 looking west as seen from Adelaide at 22:00 ACST.  Saturn is  easily visible high above the western horizon  near the head of the Scorpion with the crescent Moon close by. Comet C/2013 US10 is visible in telescopes (and possibly binoculars) not far from the pointers. The inset shows the telescopic view of Saturn at this time. Similar views will be seen elsewhere in Australia at the equivalent local time. (click to embiggen).

While Saturn is  readily visible from the end of twilight, it is best for telescope observation from around 19:00 until shortly after midnight. This is also a good time to scan Scorpius and Sagittarius with binoculars to reveal the clusters in and around the Scorpions tail.

Comet C/2013 US10 is not far from the Pointers, near a brightish triangle of stars in Lupus.It is now brightening very slowly, and may be visible in binoculars by the end of the week in dark sky sites. A black and white spotters map is here. 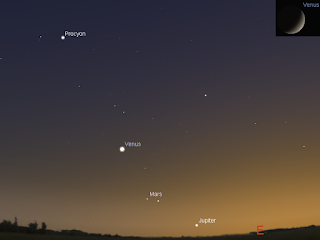 Early morning sky on Tuesday September 22 looking east as seen from Adelaide at 5:30 ACST showing Venus, Mars and Jupiter just above the horizon,forming a line with Procyon.  The inset shows the telescopic view of Venus at this time. Similar views will be seen elsewhere in Australia at the equivalent local time. (click to embiggen).

Venus climbs higher in the morning twilight and is now reasonably easy to see. It is a  distinct waxing crescent and impressive in a small telescope. Venus Mars, Jupiter nad the bright star Procyon form a line in the sky. While it is currently not very clear, over the next couple of weeks the sight will improve considerably.