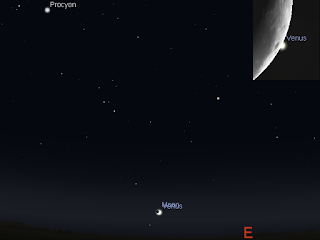 The Moon looking north-east at 4:55 am ACDST in Adelaide on 9 October. Venus is about to disappear behind the Moon. Similar views will be seen elsewhere at the equivalent local time.

The October edition of Southern Skywatch is now up.  This month features still more nice  planetary action . Unfortunately, most of it is in the early morning with Venus, Mars and Jupiter forming a line in the morning sky, Venus and Jupiter close, Venus and Mars close and an occultation of Venus. Comet C/2013 US10 may become easy to see in binoculars.

Jupiter climbs higher in the morning sky and has close encounters with Venus and Mars.

Mars is visible low in the early morning sky and has close encounters with Regulus, Jupiter and Venus.

Venus is prominent in the morning twilight and is close to the crescent Moon on the 9th. At this time it is occulted by the Moon. It forms a line with Mars and Jupiter and has close encounters with these planets during the month.

Mercury is not visible this month.

Comet C/2013 US10 has slowed brightening  and may become visible in binoculars towards the end of the month.