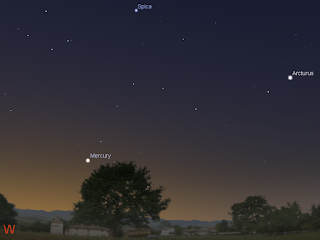 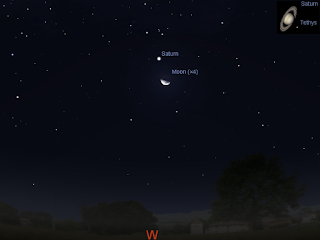 Evening sky on Saturday August 22 looking west as seen from Adelaide at 22:00 ACST.  Saturn is  easily visible high above the western horizon  near the head of the Scorpion. The Moon is close to Saturn. The inset shows the telescopic view of Saturn at this time. Similar views will be seen elsewhere in Australia at the equivalent local time. (click to embiggen).

While Saturn is  readily visible from the end of twilight, it is best for telescope observation from around 19:00 until shortly after midnight. At 18:00 Saturn is at it's highest above the northern horizon near the zenith (with Saturn facing west). By 22:00 Saturn is high above the western horizon. This is also a good time to scan Scorpius and Sagittarius with binoculars to reveal the clusters in and around the Scorpions tail. 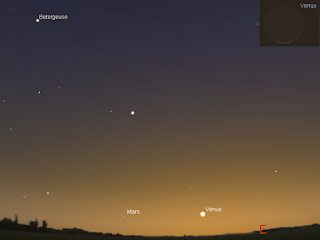 Early morning sky on Friday August 21 looking east as seen from Adelaide at 6:15 ACST showing Mars and Venus just above the horizon.  Similar views will be seen elsewhere in Australia at the equivalent local time. (click to embiggen).

Mars  is low the morning skies this week.  While it is climbing out of the twilight it still requires binoculars and a flat unobstructed horizon to see effectively. On the 20th and 21st Mars is close to the Beehive, the the twilight makes it nearly impossible to see these faint stars, even in binoculars

Venus reappears in the morning twilight. It is a very thin crescent.You will need a flat unobstructed horizon to see it before the approaching dawn swallows it up.