The New Moon is Tuesday August 26. The Moon is at apogee (furthest from the Earth), on the 24th. 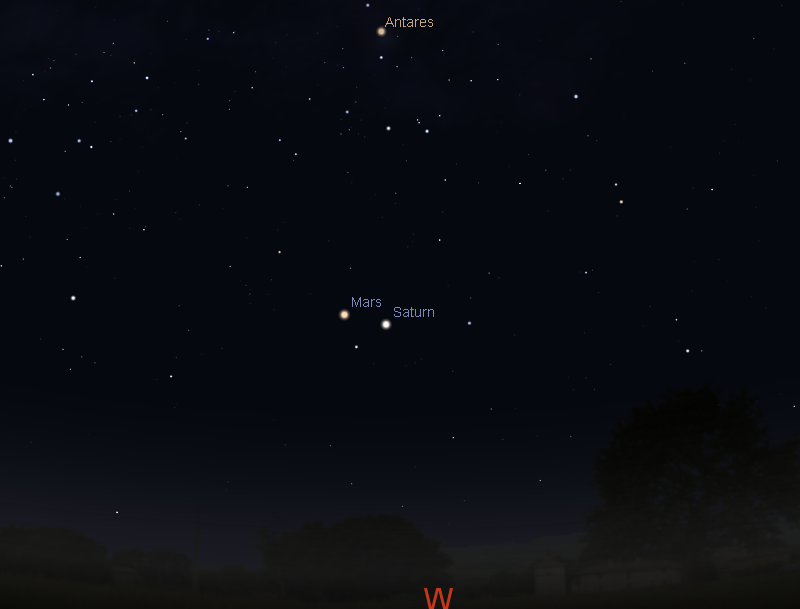 Evening sky on Monday August 25 looking west as seen from Adelaide at 22:00 (10:00 pm) ACST in South Australia. Mars and Saturn are at their closest under the head of  Scorpius. Similar views will be seen elsewhere at the equivalent local time (click to embiggen).

Mars is in the constellation of  Libra. It begins the week forming a shallow triangle with the broad double star Alpha Librae and Saturn. Over the week it draws towards Saturn, and is at its closest between the 25th and the 27th. Mars and Saturn form a triangle with Alpha Librae (also called Zubenelgenubi) at this time.

Saturn is in the early western evening sky, and was at opposition on June 11th. Saturn is visible most of the evening. Saturn is high enough from twilight for decent telescopic observation for a few hours and sets around midnight. 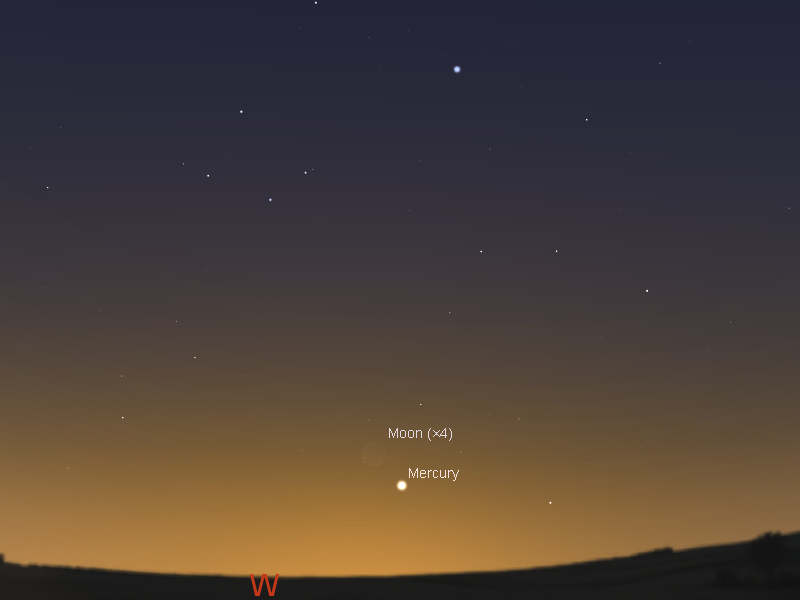 Evening sky on Wednesday August 27 looking west as seen from Adelaide at18:30 (6:30 pm) ACST in South Australia. Mercury and the thin Crescent Moon are low above the horizon in the twilight. Similar views will be seen elsewhere at the equivalent local time (click to embiggen).

Mercury climbs higher in the evening sky while it is low above the western horizon, it beomes easier to see during the week. 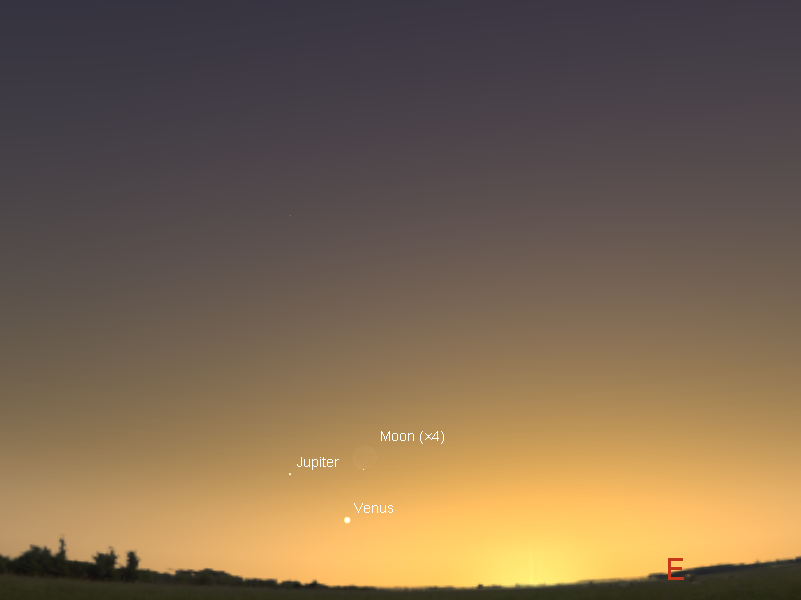 Morning sky on Sunday August 24 looking north-east as seen from Adelaide at 6:30 am ACST.  Venus is low above the horizon, Jupiter is above it and the thin crescent Moon forms a triangle with them (click to embiggen).

Venus is in the morning sky, above the north-eastern horizon.  Despite its brightness, it is now  difficult to see low in the twilight.

Venus is still close to Jupiter, although you will need a clear, level horizon to see them in the twilight glow.

During the week Venus pulls away from Jupiter as Jupiter rises in the sky and Venus sinks closer to the horizon.

On the 23rd the crescent Moon, Venus and Jupiter form a line. Although low in the twilight, if you have a flat horizon (like the ocean or dessert), you should be able to see them (and at least the Moon and Jupiter early on).

On the 24rd the thin crescent Moon, Venus and Jupiter form a triangle. The thin Moon will be quite difficult to see low in the twilight, but again if you have a flat horizon (like the ocean or dessert), you should be able to see them. You may need binoculars to see all three in the twilight. Northern Australia has better views than southern Australia.

Jupiter  it rises higher in the morning twilight, but will difficult to see without a clear level horizon. During the week Jupiter pulls away from Venus. On the 23rd and 24th the crescent Moon lines up with Jupiter and Venus (see details above).