The Sky This Week - Thursday November 28 to Thursday December 5

The New Moon is Tuesday December 3. Mars and Jupiter are prominent in the early morning. Mercury and Saturn return to the morning sky. The crescent Moon is close to Mars on the 28th, and Saturn and Mercury on December 2. Venus is easily visible late into the night in the western evening sky above the Teapot. It is visited by the Moon on the 5th. Comet C/2012 S1 ISON comes closest to the Sun on the 28th, but is no longer visible from Australia.

The New Moon is Tuesday December 3. The Moon is at perigee on the 4th. Evening sky looking west as seen from Adelaide at 21:00 pm ACDST  on Thursday December 5.  Venus is quite high in the evening sky above the Teapot asterism of Sagittarius.  The inset shows the telescopic view of Venus. Similar views will be seen elsewhere at the equivalent local times.  Click to embiggen.

Venus slowly falls back  in the evening twilight. It can easily be seen shortly after sunset (indeed, with a little effort you can see it before sunset) until late in the evening.


The brightest (spectacularly so) object above the western horizon it is still visible up to three hours or more after sunset (depending on how flat your western horizon is) when the sky is fully dark. Venus is beginning to sink to the horizon, but will be spectacular for many weeks hence.

Venus is in the Constellation of Sagittarius. It is a distinct crescent moon shape in even small telescopes. This week Venus is above the "Teapot" asterism of Sagittarius and is not far from the crescent Moon on December 3rd. 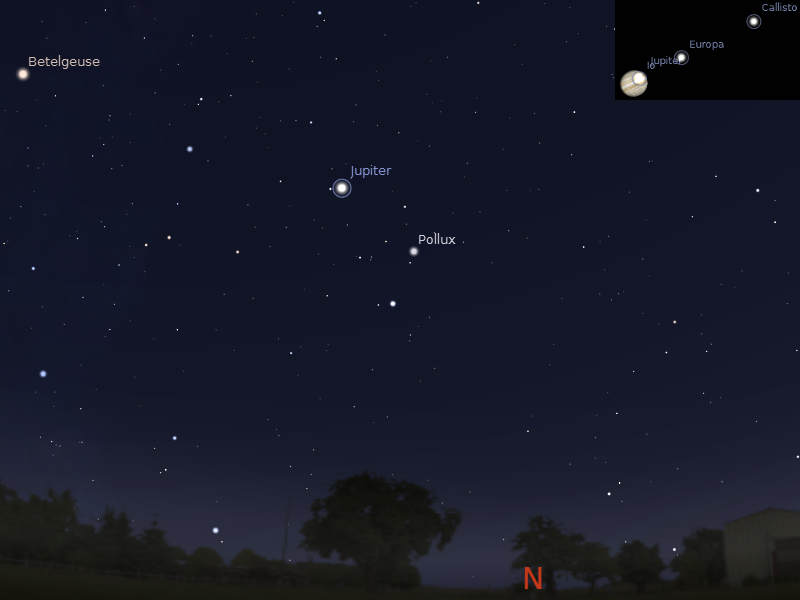 Morning sky on Sunday December 1 looking north as seen from Adelaide at 5:00 am ACST in South Australia. The inset shows the view of Jupiter through a telescope at this time. Io is transiting Jupiter at this time, Similar views will be seen elsewhere at the equivalent local time (click to embiggen).

Mars rises still higher in the morning twilight, and is visible well before twilight.  The crescent Moon is close to Mars on the 28th.

Jupiter is now well above the northern horizon near the bright stars Castor and Pollux, the twins of Gemini. It is quite easy to see in the morning sky well into the twilight.  Jupiter's Moons are now readily visible in binoculars. There are some good Moon events on the 1st and 2nd. Jupiter rises around 10:30 pm local daylight saving time, but is best for telescopes in the early morning. 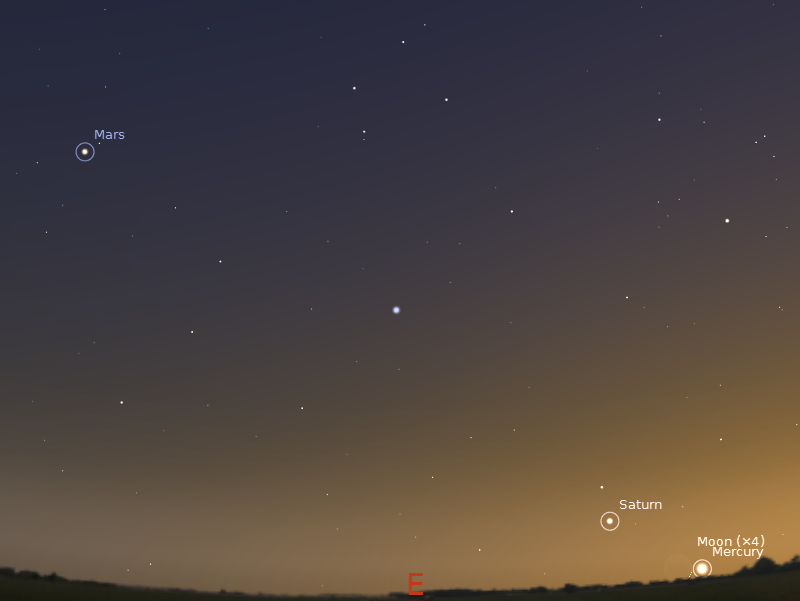 Morning sky on Monday December 2 looking east as seen from Adelaide at 5:15 am ACST in South Australia. Saturn, Mercury and the thin crescent Moon are low above the horizon.  Similar views will be seen elsewhere at the equivalent local time (click to embiggen).


Mercury  and Saturn are just visible low in the eastern horizon before dawn. They are visited by the Moon on December 2, but will be very difficult to see unless you have a flat, level horizon..


Comet C/2013 R1 Lovejoy and Comet C/2012 S1 ISON are no longer visible. If ISON has survived its journey around the Sun on the 28th then it may be spectacular in the morning skies of the Northern Hemisphere.

There are lots of interesting things in the sky to view with a telescope. Especially with Venus so prominent in the sky.  If you don't have a telescope, now is a good time to visit one of your local astronomical societies open nights or the local planetariums.