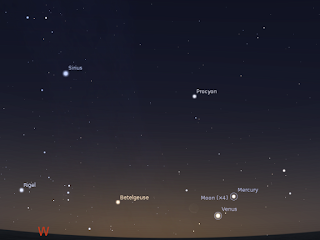 Evening sky looking west as seen from Adelaide at 18:00 pm local time on Monday June 10. The crescent Moon is close to Venus, below Mercury. Similar views will be seen elsewhere at the equivalent local times indicated here.  Click to embiggen.

The New Moon is Sunday June 9.  The Moon is at apogee (furthest from the Earth) on the 10th.

Venus and Mercury form a line in the evening sky this week. The crescent Moon joins the pair on June 10 and 11.


Venus also climbs higher in the evening twilight. It is still close to the horizon, and you need a clear, level horizon like the ocean to see it at its best. However, it is quite visible soon after sunset, and becomes easier to see as the week progresses. 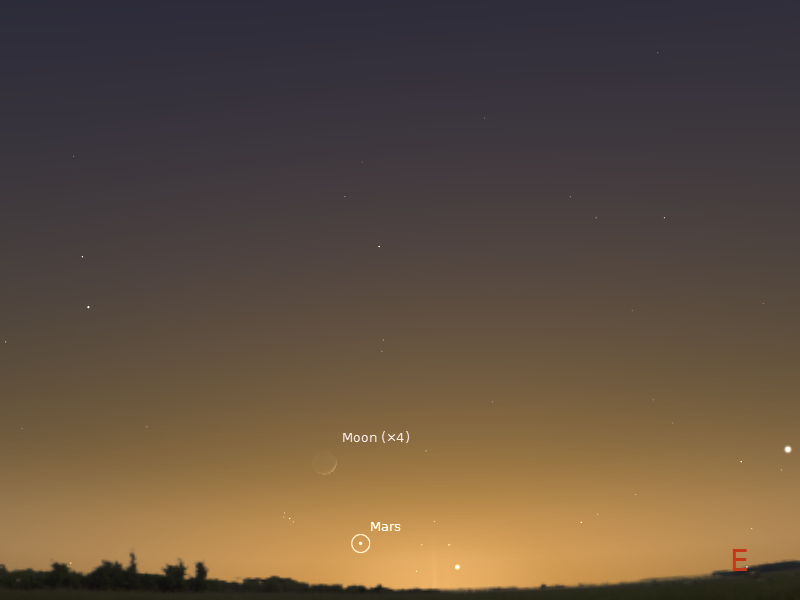 Morning sky on Friday June 7 looking north-east as seen from Adelaide at 6:45 am local time in South Australia. The crescent Moon is close to Mars in the twilight. Similar views will be seen elsewhere at the equivalent local time (click to embiggen).


Mars emerges from the twilight, but will be hard to see unless you have a flat, clear horizon. On Friday June 7 the thin crescent Moon is close to Mars.

I saw Venus twice yesterday. The definite sighting was across Lake Burley-Griffin after doing Questacon and the NGA.
In the William Turner exhibition I was intrigued by the brightness of the Moon in this painting.
http://www.william-turner.org/Moonlight--A-Study-At-Millbank-large.html
Looking closer, there was a bright spot above the moon. It is so bright when viewed directly, I'm sure it's Venus and not Juptier or Saturn. The web version doesn't show it well though.